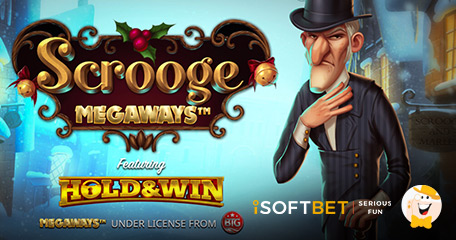 One of the most productive suppliers of immersive online casino content, iSoftBet has prepared a special surprise for fans of Christmas-inspired games. Dubbed Scrooge Megaways™, the most recent addition to the provider’s colorful portfolio brings the story of the infamous miserly character from Dickens’ legendary novel.

Enhanced with the rewarding mechanics, this installment comes with a staggering number of winning ways- up to 117,649 of them. On top of that, it contains lots of other features, among which Hold & Win, multipliers, and scatters, all designed to secure impressive winning potential.

Motivated to bring innovations, the forward-thinking producer has recently presented Jackpot Tool. This solution allows their partners to create and configure any type of jackpot for any customer requirement, ensuring a tailored high-quality player experience.

Taking place in a gloomy London street, Scrooge Megaways™ by iSoftBet tells the story of Ebenezer Scrooge, a grumpy old man from Charles Dickens's classic novel A Christmas Carol. One of the lesser-known facts about the mean old miser is that his real-life counterpart wasn’t a “mean man” but actually a “meal man”- Dickens misread it from the tombstone.

Following the launch of the game, Mark Claxton, Head of Games, iSoftBet, said:

“With the festive season upon us, we are delighted to launch our Christmas cracker, Scrooge Megaways™. With an exciting bonus round, a number of big win potential features, and an instantly-recognizable main character, it has all the ingredients to be a wonderful new addition to our slot portfolio.”

This holiday-themed title is the latest addition to the Twisted Tales series, where the central characters are inspired by iconic fictional stories. the award-winning Moriarty Megaways™, Morgana Megaways, and Queen of Wonderland Megaways are some of the action-filled releases from the collection.

Aside from a wide spectrum of themed symbols, this game encompasses a generous assortment of features, which match perfectly the gameplay and overall atmosphere.

…there’s Megaways™ mechanics, which boosts the number of winning combos to up to 117,649. Then, there’s Hold & Win. When a specific number of bonus symbols hit the reels, they unlock the round and award more respins.

Furthermore, there are two randomly triggered in-game modifiers. The Hauntings of Christmas feature sees either extra scatter symbols added to the reels, or a Max Megaways™ spin, guaranteeing the maximum number of ways for huge win potential.

If five or more Scatter symbols…

…appear on the reels during a single spin, the Scrooge Respins bonus round is initiated. When this happens, each of the scatters has a fixed multiplier value, with punters granted three respins to land more. On top of that, the respins reset back to three every time at least one new scatter lands.

In case every space on a reel is occupied during Scrooge Respins, then the multiplier on top of the reel is awarded, boosting all values on that reel. Also, there are three Jackpot scatter values of 10x, 25x, and 50x. These elements offer even higher winning potential, especially if they show up on a full reel.

“a special surprise for fans of Christmas-inspired games”

So many Christmas-related releases this year. This one with 117,649 winning ways along with Hold &amp; Win feature should be surely tested. Hope to be lucky :)

Definitely gonna have to check this put. I always like the holiday themed games and this one is right up my alley.

Starting with the theme (I'm a Scrooge's huge fan), and the features...This one is already my favorite Christmas-themed slot!

Excellent design, and a great selection of features- this game is bound to become a huge Christmas hit!