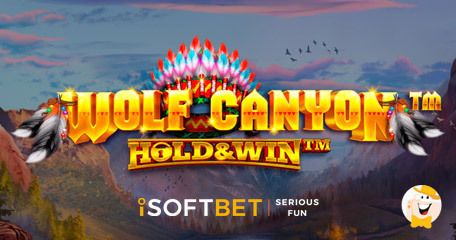 After launching another adaptation of the famous Middle Eastern folk tale in Rise of the Genie, iSoftBet is back to explore the secrets of a majestic canyon. Therefore, get ready for a new release from the leading online games supplier and content aggregator this month, called Wolf Canyon: Hold & Win!

The studio’s latest Hold & Win title is inspired by a ravine where Native Americans lived in perfect harmony with magnificent wolves and other wildlife. Joining them as a player will give you plenty of opportunities to discover lucrative rewards, so keep reading.

A Trip to the Canyons

If you’re into unparalleled levels of excitement while visiting deep clefts between the escarpments on cliffs, take a trip to the stunning southwestern region of the United States. There you will encounter a host of in-game features like bonus spins, expanding wilds, a Lucky Dreamcatcher and respins in iSoftBet’s all new Wolf Canyon: Hold & Win.

The game’s biggest attraction is Lucky Dreamcatcher, which triggers randomly on any base game spin. As a result, it opens up to reveal an instant cash prize, but these can range from 8x, 88x, 888x up to a massive 8,888x the bet!

Next, it’s all about landing the Native American Totem wild. Apart from substituting for other symbols, it can be stacked on the central reels to boost wins. Furthermore, if you get to the Pick-A-Wolf feature, the game could award more extra spins with up to 100 added wild symbols.

Finally, a combination of five or more Cash Moon symbols will activate Hold & Win respins. At first, you get three initial spins which reset whenever a new Cash Moon lands. Once the respins run out, all cash values are collected and added to the balance.

To make it a journey of a lifetime, iSoftBet added Mini, Minor and Major Moon Awards during the Hold & Win bonus round. On top of that, the Grand Award of 1,000x the stake is its maximum value.

“Our latest release, Wolf Canyon: Hold & Win, delivers a rural experience built around the interaction between indigenous peoples and their surroundings, commented Mark Claxton, head of games at iSoftBet.

At the beginning of this month, one of the industry’s fastest growing casino games and marketing tools distributor, 3 Oaks Gaming, has signed an integration deal with iSoftBet. As a result of this arrangement, its complete portfolio of games will become available on the provider’s famous GAP platform.

Among the most popular titles from 3 Oaks are Magic Apple 2 and Fish Reef Megaways, but players will also see classics in the style of Book of Wizard and 3 Coins Egypt.

“a new release from the leading online games supplier”

I mean when these guys make a new game, they really outmatch any other provider and set high standards. The Native American theme is their thing definitely and I always get excited when there’s a new installment on the market.