iSoftBet Gallops into the Sunset in Mighty Stallion Hold & Win 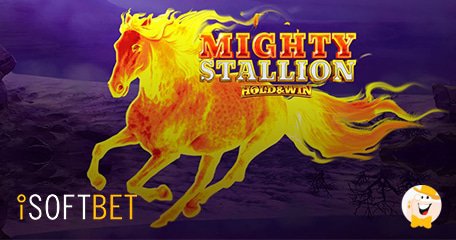 One of the award-winning online games suppliers and content aggregators to the iGaming industry, iSoftBet, has saddled up for a breathtaking adventure in its latest galloping hit – Mighty Stallion: Hold & Win.

This title represents the provider’s first launch in 2021, joining the studio’s latest roarsome hit from December, Raging Dragons. It is set in the Wild West, transporting players back to the American outback on a 3×5 grid with highlights in the style of extra spins, respins and popular Hold & Win mechanic.

The leading online games supplier has taken its Hold & Win format to new heights in Mighty Stallion, launching not only this title but many other right at the top of slot charts in 2020. As the game starts, players have three respins at their disposal, which reset every time a fireball lands on the board. After filling all 15-reel spots, users may well hit a gigantic 1,000x reward.

However, chances of winning are not limited to respins only. The base play offers a chance to trigger Wild Spins at any time, causing the giant Wild Stallion symbol to spin through and land as a colossal wild.

As expected, three or more scattered Mighty Stallion symbols activate complimentary spins. This engaging round features special stacked wild multiplier coins on reels 2 and 4, able to multiply wins by up to 100x!

In addition, Mighty Stallion Hold & Win represents the studio’s latest expansion in the widespread series, whose popularity may even overshadow the Megaways mechanic in 2021 and its top-performing titles such as Queen of Wonderland, Shining King and Dragon Match.

On a related note, iSoftBet was recently nominated as the Game of the Year and Provider of the Year at the BigWinBoard Awards. Thanks to its versatile production strategies and innovation, the developer has become the number 1 pick in many regulated jurisdictions where it operates, including UK, Belgium, Croatia, Estonia, Hungary, Italy, Latvia, Lithuania, Portugal and Switzerland.

“Mighty Stallion Hold & Win combines both free spins and respins in a fast-paced gallop across the reels that is sure to produce immersive gaming experiences.”

“With a free spins feature that can see a player’s win multiplied by up to 100x and a lucrative respins mode where wins of up to 1,000x can be achieved, Mighty Stallion can transport players to lucrative wins on any spin,” concluded Probert.

Sliding into 2021 with The Mill Adventure

Speaking of a steady popularity growth, iSoftBet has signed an out of the norm deal at the beginning of January with a start-up platform The Mill Adventure. The provider is in the process of integrating its complete content suite and Game Aggregation Platform (GAP), including more than 8,000 titles from 70 leading games studios like Eyecon, Spadegaming or Hero Gaming.

The offerings will cover not only the latest in-house slot products Phantasmic Fortunes, Gold Digger and Western Gold Megaways, but other top-performing Hold & Win follow ups such as Thunder Shields.

“iSoftBet, has saddled up for a breathtaking adventure”

Wow I really like the theme on this one. iSoftBet has really improved the game design and features over the years.

Already a great start to the year. It has a beautiful background and exciting features, mainly hold and win.

This game looks fantastic.. Good luck and have fun LCB'ers!

One of the best genres if you’re a true admirer of westerns and the great plains of Murica. Can’t resist this genre.