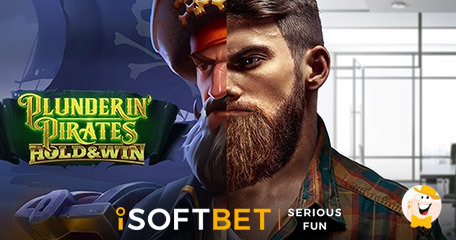 iSoftBet, a prominent supplier of online casino games and aggregator, is ready for another adventure. This time, the provider invites customers to spin the reels on the deep seas, and try to claim some riches in the latest game Plunderin’ Pirates: Hold & Win.

The brand-new slot includes a layout of 5×3 along 20 paylines. It also comes with incredible features such as Hold & Win Respins, Booty Boosters, and Explosive Modifiers enhancing the level of entertainment and the user experience.

The highest paying symbol appears in the form of a pirate captain providing 25x the wager when hitting five of a kind. At the same time, the female pirate, parrot, and monkey follow when it comes to other symbols with immense payouts.

To trigger the Hold & Win Respins bonus you need to match at least five gold coins and claim three starting respins, which return to three every time a new symbol appears. You can also land Booty Boosters in different colors during the feature and trigger one of the modifiers.

The game also includes Silver Booster which collects the values from each gold coin in view. Green will enhance all successive coins by one level, Blue releases an additional row above the reels, while Purple gathers the values from gold and silver coins in view. All gathered coin values also stay in view after the boosters have been utilized, so the potential for massive rewards will grow rapidly, taking the excitement to another level.

As part of any main game spin, the pirate captain can toss the bombs onto the reels to convert symbols with one of three potential outcomes: Wilds Add, Symbol Upgrade, or Bonus Add. The latter will include additional gold coins to the reels enhancing the probability of a feature trigger.

Plunderin’ Pirates is yet another Hold & Win game and part of iSoftBet’s extensive portfolio. It comes right after adding other hits such as Moon Spirit: Hold & Win, Crabbin’ Crazy: Hold & Win, and the top-notch Brilliant Diamonds: Hold & Win.

Speaking on the latest slot, Head of Games at iSoftBet, Mark Claxton, said:

“We are delighted to finally be launching Plunderin’ Pirates: Hold & Win, bringing the thrills of an ocean adventure to the screens of our players.

“The game features three in-game modifiers as well as a unique bonus round, complete with exciting Booty Boosters, offering the fun player experience that our Hold & Win collection is known for.”

“claim some riches in the latest game”

What an exciting journey in the depths of the sea with such a big win potential. Looking forward to playing this game…