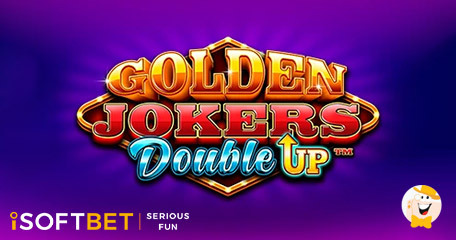 Provider Returns with More Fruity Wins All Throughout May

Right after treating us with Triple Fruit Deluxe Megaways in April, iSoftBet, is back to fill the reels with more vibrant fruits and lucky 7s in the hunt for money-spinning wild multipliers, one of the major features in all-new Golden Jokers Double Up!

The leading online games supplier and content aggregator has used a lot of nostalgia-inducing emotions to provide the ultimate fun across 1,024 ways to win in this title but don’t worry – there is a special Double Up option to spice things up on a lucky day, as well as scatter symbols that should provide a greater chance of triggering the main highlight.

A Classic with Elevating Wins and Features

Not so long ago, we wrote about iSoftBet’s earlier release from April, called Rising Samurai: Hold & Win where players are required to channel their inner zen and follow in the path of the warrior.

However, since the last two additions to the portfolio by the said provider have taken the form of iconic retro themes, it’s time to check out more juicy twists this month and upgrade the recent experience after Triple Fruit Deluxe Megaways from April 28.

As you hit the reels with iSoftBet and its latest slot in May, get ready for a real rollercoaster ride with bigger payouts during bonus spins! The top-paying symbol in this game is the Golden Joker, while red and blue lucky 7s (and a classic bell) complete the top end of the paytable – nothing new there then.

Still, by landing three, four or five scatter symbols anywhere in view, players are in for a surprise as they get to activate the Bonus Wheel. It awards one, two or three spins, respectively, where each roll has the potential to bring up to 15 complimentary rounds. The maximum cash prize is worth up to 10,000 coins in this level, so… brace yourself for some real good action!

On top of that, landing any wilds during honorary spins will also randomly turn into Wild Multipliers – the game’s secret weapon! Each one is worth 2x or 3x the bet, but they can actually multiply each other up to 27x, resulting in some truly golden wins!

As already mentioned, Golden Jokers Double Up follows in the footsteps of Triple Fruit Deluxe Megaways and Rising Samurai: Hold & Win, but the supplier is getting ready to launch another great title this month (more details below).

What’s In the Pipeline

Currently, there are two upcoming releases on the provider’s site, scheduled for May and June.

The second title to go live this month is called Musketeer Megaways: Richelieu Riches and it is based on a French historical adventure novel by Alexandre Dumas.

Later in June, we will be treated to a brand-new adventure named Aztec Gold Mines in which the players must fight their way through the dense jungle in order to uncover the forgotten riches of Mesoamerican ancient civilizations.

Meanwhile, IGT has recently published a definitive offer to acquire iSoftBet for €160 million.

I absolutely love their fruit machines, always so full of energy, good vibes, decent wins and player-friendly options. Thank you for sharing!