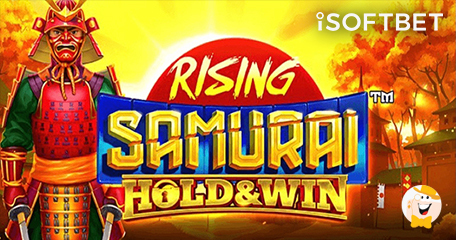 The title comes with 5 reels and 576 winning ways in the main game, which can be enhanced up to 3,087 ways during the Bonus Spins round. As part of the upgrade, new rows can be released above reels 2, 3, and 4.

Four Samurai Warriors are the best-paying elements in the game, delivering up to 12.5x the wager for hitting five red warriors. At the same time, the Shuriken star works as the Wild and can swap any other element.

You need a minimum of 5 Samurai coins to activate the Hold & Win Respins, where these elements can be worth up to 10x the wager. Additionally, Mini, Major, Maxi, and Grand coins, with values 25x, 50x, 100x, and 250x, respectively, can be gathered as well.

Three or more Bonus elements provide Bonus Spins, with particular Samurai Booster elements either uncovering extra rows over the middle reels to enhance the number of winning ways or enhancing the win multiplier. The latter then applies to all left casino spins.

The Hold & Win game also comes with an in-game Katana Modifier which works at random. As part of the same, the Rising Samurai can emerge over the reels to provide a winning spin or trigger Bonus Spins or Rising Samurai Respins.

Rising Samurai: Hold & Win is yet another game from iSoftBet and part of its successful Hold & Win collection. Only recently, the company had added other hits such as Plunderin’ Pirates and The Magic Orb.

Speaking on the new title, Head of Games at iSoftBet, Mark Claxton said:

“Rising Samurai sees us steering the Hold & Win offering in a new direction by drawing inspiration from Japan and the ways of its noble warriors.

“The title goes above and beyond in terms of the impressive number of modifiers and special symbols it provides, giving players every chance of landing an impressive win while they enjoy the exceptional graphics and animations on display.”

iSoftBet is an innovative supplier of mobile and casino content, with a ‘Serious fun’ approach. The company delivers immersive content to the most successful companies in the world and their users. iSoftBet believes in three values - respect, curiosity, and passion. They provide funny content but put employees, clients, and customers above all.

I love the music in this game. It really adds to the atmosphere of the game and holds the players attention.

576 winning combinations sounds enticing enough for anybody to want to play this game and how about the 3,087 winning ways when you enter the bonus spins round. Loads of opportunity in this new slot. I'd definitely give it a try!

iSoftBet is known for powerful games and its forward-looking strategy. Looking forward to testing another interesting game…