Journey Flirt by BGaming is Live! 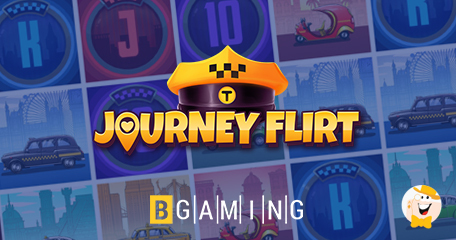 Joining the iGaming industry in terms of slot development these days is also BGaming, provider of next level casino content for mobile and desktop devices.

By launching its latest slot release called, Journey Flirt, the provider is also sending a message that “love is in the slot” not the air. This fascinating and adventurous romantic story is taking all players on a trip around the world, featuring a young couple who decides to leave home and look for happiness elsewhere.

As luck would have it, they both find themselves on the crossroads of coincidence to experience the best times together in Cuba, Mexico, USA and England. Let’s see up close how this love story really looks like…

To Travel is to Live

You’re probably familiar with this quote, right? It almost instantaneously makes you want to wander. BGaming is well-aware of this fact and it successfully managed to capture the essence by integrating it in catchy trips and an adorable love story – a nice recipe for Hollywood blockbusters and online slots, if you ask us.

Long story short, the new release comes with a standard configuration and features 5 reels with 3 rows. However, the winnings entirely depend on 243 paylines, 4 bonus cities, extra spins, sticky and expanding wilds. The game even features flexible and fixed multipliers, lifting the entertainment levels and contributing to the overall player experience while traveling the world!

The developer’s latest title from its reel catalog was released on October 4th, 2019. Its mechanics are based on low variance and it has a 96.6 per cent return-to-player rate, which is slightly above the average.

The main highlight of this game is the Journey Flirt feature and it starts a single spin when two symbols of the boy and the girl halt opposite each other on the adjacent reels. In bonus rounds, as well as throughout the game, the boy and the girl represent two wild symbols. Apart from being able to change visually, they can replace any other symbol on the reels, except scatters.

To launch the extra Spin round, players must land at least 3, 4 or 5 scatter symbols on the reels. There are four options in a bonus round with different numbers of spins and traits. When in London, players can activate the expanding wild and boost their winning combos, but the love story is even more intense in Mexico, when sticky wilds come into play and freeze to extend the following spin.

As the story unfolds, players trigger two additional features – fixed multiplier in Havana and flexible multiplier in New York. Each spinning mode is multiplied either by a specific number or the amount of the appeared wild symbols which are part of the winning combination. Oh, là là!

Just in time for this year’s Halloween, one of America's most beloved holidays, the iGaming supplier is getting ready to surprise its customer base with Spin and Spell, a five-reel, twenty payline game that features bats, cats, Count Vampiraus and lucrative payout modes, backed with haunting music and twinkling sound effects!

As far as it goes to features, players can expect 10 extra spins when 3 or more scatters land anywhere on the reels, as well as expanding wilds and a guess-game containing a seething pot with 8 eyeballs.

What a funny name it is :) The game theme would be better if two guys(or girls) search for and meet some nice girls in those cities. This game has many popular features like sticky and expanding wilds, etc. I played some of Bgaming slots mostly in Bitstarz, 7BitCasino which are Softswiss white labels. The games were...

What a funny name it is :) The game theme would be better if two guys(or girls) search for and meet some nice girls in those cities. This game has many popular features like sticky and expanding wilds, etc. I played some of Bgaming slots mostly in Bitstarz, 7BitCasino which are Softswiss white labels. The games were very mediocre. I hope that the new games would be better.

I prefer their table games better, they invest more in gameplay of poker and baccarat than slots. After playing their multihand blackjack, I learned so much about the game, highly recommended.