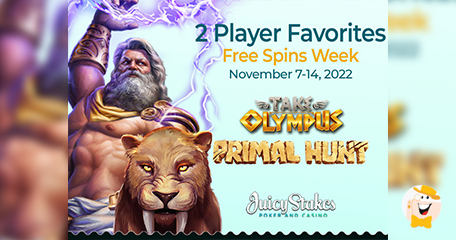 If you’re ready to make some wins on two all-time favorite slots from Betsoft, you might want to check out the “Free Spins Week” over at Juicy Stakes.

The casino has launched an expansive promotional campaign through November 17, allowing any funded member to have a shot at Primal Hunt and Take Olympus with 45 or 75 complimentary spins, respectively.

Later this month, the all-new “Sleighin’ It” Christmas slot from Betsoft will be revealed, probably featuring an extra round of goodies, so stay tuned!

Juicy Stakes is back only a few days after giving a handful of Halloween treats and complimentary spins on newer releases from Betsoft.

To start a new promotional chapter in November, the casino has prepared two perennial player favorites. They are both part of the reputable Free Spins Week, which extends all the way through November 17.

If you are familiar with titles Primal Hunt and Take Olympus, then you already know what to expect. Each slot comes with a round of bonus treats and exciting themes that players find highly entertaining and exciting over and over again.

To surprise all its loyal members and Betsoft fans, Juicy Stakes is launching a promo in which players can get extra spins on these popular games. The only requirement, however, is to deposit as little as $25 before opting in.

The maximum prize during their honorary spins is a real savory – $250.

If you rather see yourself as an explorer of the Stone Age, pick Primal Hunt, a fast-paced slot machine with multiplying Wilds and extra spins. Pay special attention to a prehistoric Cave Lion, as it can trigger up to 20 complimentary spins!

One of the reasons this game has been so popular is its Multiplying Wilds. During honorary rounds, wilds can multiply wins 2X or 3X. However, they can also multiply with other multipliers and result in massive payouts up to 27X the bet.

Visiting Ancient Greece in Take Olympus is a good idea if you’re more into visually stunning graphics that feature four Olympian gods: Apollo, Aphrodite, Poseidon, and Hades. Each deity has their own special powers to grant multipliers, wilds and extra spins.

Here is how you can get extra spins for both games:

Take a look at the video below to learn more:

Remember, the newest Christmas slot from Betsoft arrives already on November 17th. It is called, Sleighin’ It, and its gameplay is packed with an enormous progressive jackpot that grows quickly since it’s linked with other Betsoft titles.

November Slot of the Month

You can rack up even more complimentary spins this month when you deposit a bit more. Starting on 1st of November is the casino’s regular slot of the month campaign, and the featured game is Wilds of Fortune.

The larger the deposit, the more promotional spins are included.

“casino has launched an expansive promotional campaign through November 17”

I alwasy love to see their promos, I know they have a nice game for players, goog luck and enjoy.

Love me some Juicy Stakes promos! I'm always so quick to capitalize on the opportunity..