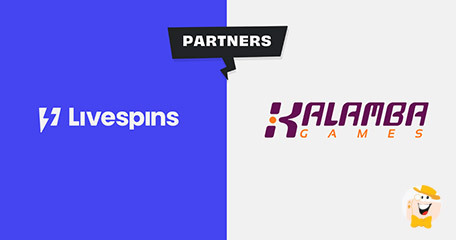 One of the most successful providers of slot content, Kalamba Games, has become the newest company to benefit from the popularity of streaming by including its full suite of games into the Livespins portfolio for the first time.

Livespins is live on casinofriday.com and has become one of the most popular brands in the market.

Based on the newest deal, Kalamba Games’ attractive and entertaining slots will now be available to Livespins’ streamers, involving player-favorites such as Blazing Bill Cash Quest – Next Release, Mochina Megaways, and Joker Max.

Livespins is changing the online casino environment via its platform which provides a socially charged experience to users. It provides a new method for them to relish the excitement of slots by using powerful streaming technology.

Thanks to the new solutions, players can now follow the leading streamers in the world, but also bet behind the live-action occurring across the gaming reels. As for the social interaction, it is provided with a chance to interact and chat with streamers and other users in the game, while also including reactions to the gameplay.

Livespins is the company that looks for the leading studios to partner with. That’s why they chose Kalamba Games as one of the most promising studios with an innovative approach and creative force. This is yet another partnership for the company which will continue to build its customer base.

“Content is such a fundamental part of any live stream so for us, it is important to keep onboarding the most exciting and innovative game developers in the market, and in Kalamba Games we have yet another great partner.

“By giving our streamers access to in-demand games from a wide range of studios, they have what they need to thrill and entertain players who, via our state-of-the-art platform, can not only watch the action but bet behind it.”

He adds that Kalamba will be a popular option for their streamers and other audiences, and they are delighted for them to have become the part of Livespins family.

On the other side, Andrew Crosby, CCO at Kalamba Games says that streaming is becoming an important channel where users engage with casino content and Livespins has taken this move further by enabling players to bet behind what is occurring on the reels. The company is thrilled to have incorporated new titles into the Livespins and can’t wait for its streamers to enjoy an exciting experience.