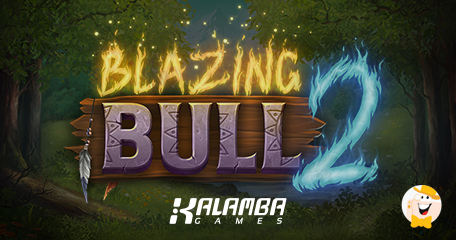 Renowned slot supplier and gaming innovator, Kalamba Games, has taken one of its best performing titles and created a sequel to treat all of those fans who were impressed by the original!

Blazing Bull 2 represents a bigger and even better sequel to last year’s spiritual Buffalo-based smash hit filled with fantastic features promising to take punters on a spiritual ride through nature!

Expect to come across well-known symbols from the initial release, landing across the 6x4 grid, offering exciting 4096 ways to win!

Players will be treated to two unique bonus rounds with wild multipliers and split symbols, and there’s a fantastic top prize of 50000x the stake up for grabs!

“The success of the original game gave us a great platform to build from with Blazing Bull 2. We’ve taken that red-hot gameplay and cranked it up to offer even bigger potential wins,” and added:

“The feature set is really clever and offers some real high points in play – our mathematicians and entire dev team have done a superb job.”

When K-Split Free Spins are triggered, a moon-powered mystical energy bolt will select one symbol at random after each spin to count as x2 or x3!

Multiplier Wild Free Spins show a sun-fueled energy bolt selecting a Wild Multiplier of up to x8 for even greater potential wins!

Kalamba Games is one of the leading slots and casino software developers and suppliers with headquarters in Malta and a development studio in Krakow, Poland.

I liked the previous one, but this one seems even better, especially with the addition of K Split free spins.

I really appreciate it when a developer creates a sequel that is actually upgraded and not just the same title with a small addition. I will definitely try this one out!