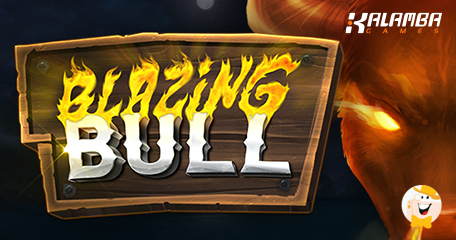 Kalamba Games has unveiled their new slot that features wildlife on its reels and high volatility in equal measure: Blazing Bull!

The game has a unique gameplay feature that sees the backdrops switch between night and day. The bears, wolves, cougars and eagles all appear on the 6x4 grid with as much as 4,096 paylines!

…and symbols that help players in earning big wins, such as a dreamcatcher Wild that substitutes for all symbols except for the bonus, x2 and x3 Wilds.

“Enjoy the beautiful scenery and commune with the wildlife with this unmissable addition to your lobby which offers huge win potential and features that engage and excite players.”

Check out the game’s official preview below!

…Kalamba announced that it is to design a new slot game with the help of Twitch streamers and Wildz Casino.

Between April 27th and Mat 10th, eight Twitch streamers will try and land a single win with the highest possible outcome on any of the producer’s games. The streamer that manages to do so will be invited to cooperate with the developer’s team and provide personal insight that will be used to make the new game.

Head of sales, Tamas Kusztos, said: “We very much look forward to seeing what kind of game comes out at the end of this process and I’d like to wish all our streamers the best of luck in the competition.”

Prior to that, Kalamba entered the regulated Asian market with QTech’s platform to whom they delivered their top-performing slot games.

This is the part of the strategy to develop its RGS platform that will be launched soon.

Kusztos said that QTech is one of the leaders in the Asian market and an ideal partner for the company that wants to establish itself in the region.

Nice looking game for sure!