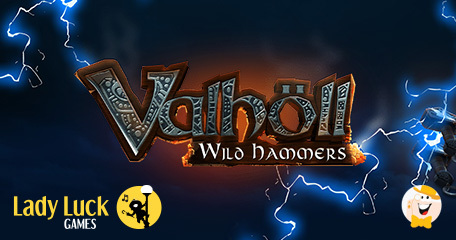 Are you ready to partner with Valkyries and reveal an underground world? Join the brave warriors of ancient times who sacrificed their lives in combat and uncover the powers of mighty hammers in Valhôll: Wild Hammers!

Lady Luck is back to reintroduce new Viking legends in its ambitious reboot, which is already live at Novibet, Parimatch and ComeOn through exclusive deals since 6 July!

As players around the world finally get their hands on the highly anticipated follow-up from Lady Luck in July, we also take a look at Valhôll: Wild Hammers to let you guys know what to expect!

In case you need a reminder, the previous game in the series was released back in 2021 under the name of Valhôll: Hall of the Slain (take a look at the slot review to learn more).

For starters, the wild symbol is present in this slot too and it will substitute for all symbols to complete any potential winning combos. However, wilds will not substitute for bonus symbols and coins.

As you continue to walk through the underground, keep an eye on Two Hammers, as they can appear in random positions above the reels at the start of every game round. Depending on their posts, there are three features to look out for, so make ready to receive:

Back on June 1st, the up-and-coming Swedish gaming studio, LL Lucky Games AB, officially applied for a gaming license in Ontario, Canada. The group has a lot of potential to develop into a significant market leader, mostly thanks to licensing for online gaming in North America. In thi region, it can serve a population of over 14 million residents, as reported by the newly regulated Canadian province.

Lady Luck has even recruited new experienced personnel in order to remain competitive on the global market. Early in March, Andrzej Mieszkowicz joined the company thanks to his strong financial background from start-ups, but also a leading finance role with iGaming companies such as Xcaliber (a former subsidiary of Cherry AB).

In April, the Swedish supplier of online games to the industry signed a Letter of Intent with the intention to acquire ReelNRG. This small studio has a portfolio of 46 games and licenses for the UK and Malta.

“Get ready for the big comeback of Valholl`s most powerful gods!”, ladyluckgames.io, July 28th, 2022.

“Lady Luck is back to reintroduce new Viking legends”

These guys are growing fast, congrats. Like the new game too, it reminds me of many hits by Yggdrasil, so it’s definitely the Scandinavian school of game development.