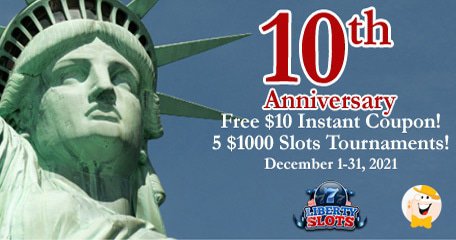 US Gaming Brand Marks 10th Birthday with Freebies and Freerolls

One of the most visited online gaming destinations for US-based players on the web, Liberty Slots, is celebrating its 10th anniversary this week by slipping in a $10 freebie and launching five $1000 freeroll tournaments, valid through December 31st, 2021.

Take part in the operator’s monthly rally and win a share of the prizes by playing some of the casino's most popular slots, such as Amanda Panda, Beat the Bank, Caribbean Gold, Cleopatra's Pyramid II and Wheel of Chance II, brought to you by Wager Gaming – a software provider with a long history in the iGaming industry.

The month of December is special for Liberty Slots as it marks the company’s 10th anniversary since the launch. If we look back, during these ten years, the operator has been more than welcoming, having entertained tens of thousands of players from the US and other corners of the world.

Renowned for its exceptional tournaments as well as the immensely popular ‘Give Me Liberty’ complimentary loyalty bonus program, the casino is now expanding these unique offers to celebrate the tenth anniversary on the market.

“Over the past decade we've seen such significant changes, especially the transition to mobile gaming. That was a chance to completely re-think the player experience,” said Mark Ramirez, casino manager about the special occasion for Liberty Slots.

After refurbishing their platform in 2019 and entering LCB’s Rewards Program, Liberty Slots incorporated more games from new iGaming suppliers, and gave their players a ton of reasons to experience solid entertainment on a daily basis.

According to Ramirez, the platform maintains its commitment to offering the finest in iGaming entertainment and constantly improves services and overall value. The team looks forward to sharing this milestone event with players throughout December and hopes to celebrate many more birthdays in the future.

If you want to grab a free $10 instant coupon at Liberty Slots and become one of the lucky players who triggered a winning spree, use the coupon code LIBERTY10, valid through December 31, 2021.

To compete in one or all five $1000 slots US-friendly tournaments during the celebratory month, check out five week-long freerolls featuring some of the casino's most popular slot games like Amanda Panda, Beat the Bank, Caribbean Gold, Cleopatra's Pyramid II and Wheel of Chance II from Wager Gaming.

The first seven-day tournament starts on December 1st, 2021. Each tourney is free to enter and open to all players. Likewise, every contestant begins with the same balance and the top ten are in for the big prize of $1000 in real money.

On a final note, all games are at this casino are certified fair and bear the Fair Gambling seal. Take a look at the video below if you want to learn more details about the anniversary promo and good luck!

“Liberty Slots, is celebrating its 10th anniversary this week”

10 years? Thats gotta put them at like OG status as far as online casinos I would think. Congrats! Thanks for paying it forward.

Congratulations :) As one of the leading US brands, we wish you another decade full of accomplishments and more attractive promotions for our players. Keep up the great work Liberty Slots :)

Congrats! Thanks for this great promo!

Happy anniversary, Liberty Slots! Wishing you even more success in the upcoming future! All the best!

Happy anniversary! Thanks for these amazing promotions!

Thanks for all the great promotions for the player over the years! Happy anniversary!!!

Happy anniversary Liberty Slots! Hope the next 10 years will be equally successful.

Wow has it been ten years already? Thank you guys for looking after your players and being out there all this time. You’re the best!