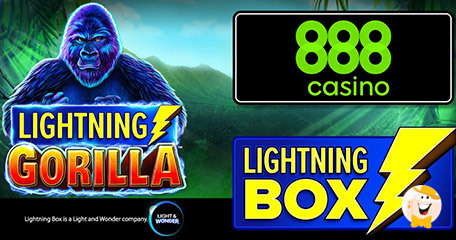 Award-winning provider of slots, Lightning Box, has just decided to enhance its extensive portfolio by introducing animal-inspired slots with the addition of Lightning Gorilla.

This latest slot from the brand includes 40 paylines while also adding a Lightning Respin feature and a four-leveled Lightning Jackpot that can see customers take up to 1250x the wager. The game will go network-wide after a two week debut via 888 Casino.

If anything between 6 and 12 Lightning Bolt elements appear anywhere on the reels within the main gameplay, the Lightning Respin feature will be triggered. Players get three respins that return to the initial value every time Lightning Bolts with cash values land. Respins will be gathered if they appear within the borders of the active reels.

While in this bonus round, Colossal Lightning Bolts could emerge on an active reel, before dividing into separate elements and paying an equal value.

It is also possible to claim one of 4 fixed jackpots - Mini, Minor, Major, and Grand. Just hit the right symbols on an active reel within the Lightning Respin feature and get anything from 5x to 1250x the bet depending on the starting stake.

Lightning Gorilla is accessible to players of Light & Wonder’s industry-leading OpenGaming™ platform together with popular new releases such as Murphy’s Pots and 100xRa.

“Players have been shouting from the rooftops about how much they enjoy our Lightning Respin feature, so it only seemed natural to develop a brand-new game around the popular feature.

“Lightning Gorilla is a fantastic addition to our already strong portfolio of slots, and we think players will go bananas for this lucrative new title.”

VP Game Development at Light & Wonder, Rob Procter, says that the team at Lightning Box have done it once again and Lightning Gorilla is a powerful game, so they are delighted to include it on the OpenGaming™ platform. Their signature Lightning Respin addition is fantastic and he has no doubt customers will adore this game.

Thanks to the clients in the brick-and-mortar space, online and social casino market, its team of talented designers and math specialists have been delivering engaging and unique content ever since the establishment of the company in 2004.

What an incredible game form the brand. I enjoy animal-inspired games and this will be another perfect addition to their portfolio after Redroo, Panda Pow and Astro Cat…