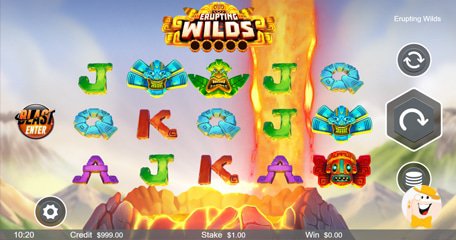 Time for Some Tropical Wins!

After traveling to the eternal city with Win in Rome, discovering an ancient tomb in Orb of Osiris and setting off flaming wild spins in Wild Gods of Egypt, the Staffordshire-based producer of digital gaming content, Live 5 Gaming, is back to embark on an adventure to a paradise island, where an active volcano throws crazy wilds onto the reels to trigger streams of red-hot wins!

The studio’s latest game is taking players to a distant tropical reef in what is set to be the hottest slot launch of the summer, named Erupting Wilds. Proceed with caution though, since the island is home to an active volcano that can erupt at any point in regular play, disbursing all kinds of wilds onto the reels and potentially reaching the game’s top payout of 3000x the stake.

Erupting Wilds is the provider’s latest contribution to the iGaming industry, featuring a 5x3 reel setup with 243 payways that can expand to a massive 5x5 but only on reels two, three and four. During this mode, the game’s burning wilds will be stacked on top of each other while the volcano may continue to throw out additional wilds at random and increase balance.

On every spin, there are at least one, two or three Lava Reels, but if a wild symbol lands on that reel the Sticky Wild Lava Reel Respin will come into play. Next, the wild icon may lock into place and award a respin. If another reel becomes a Lava Reel and if a wild lands on it, the sequence is repeated.

For those who can handle the heat, there is a complimentary spins bonus on offer, which is activated when three, four or five scatter symbols appear anywhere on the reels.

Meanwhile, the dynamic producer of digital, high-quality games for some of the world’s leading gaming operators has even included its innovative BlastTM feature into Erupting Wilds.

If you’re not familiar with this attractive feature, there are exactly three tiers of BlastTM – Super, Mega and Ultra – where at each stage a set of symbols is removed from the reels, resulting in higher volatility and larger potential wins.

The studio’s favored in-game attraction consists of two parts, a pre-game with a wheel where players spin the dial to land it within the win zone and any other spin that lands within the win zone. Customers play out 4 spins on a 5x5 reel matrix where any wilds that land have sticky abilities.

Although it’s a young game studio, Live 5 has established itself on the market as one of the most in-demand developers mostly thanks to combining smart math and modern mechanics with remarkable design and authentic sound effects.

According to the provider, this strategy delivers peerless levels of fun and entertainment, including big win potential.

Live 5 is live with operators in a majority of highly regulated markets such as the UK, Spain, Sweden, Italy, Denmark, Lotto Quebec in Canada and Malta.

“Players may not be able to travel abroad this summer but with Erupting Wilds they don’t have to as the game takes them to a beautiful tropical island,” commented about the new game launch Lloyd Butler, CEO of Live 5.

“Live 5 Gaming, is back to embark on an adventure to a paradise island”

They did a good job with this title, it has all the elements of supreme gaming, innovative features, expanding reels, you name it. Can’t wait to see more titles from these guys.