Live 5 Turns to Luck of the Irish, Rainbows and Pots of Gold in 4x Clover 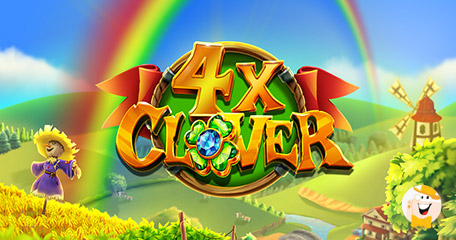 Developer Sets off on a Four Leaf Clover Adventure with 1,000x Win Cap

After adding 3 Books of Khan and other incredible slots to its roadmap over the course of last 6 months, Live5 is finally back to uncover a new gem in its roster. The UK-based studio has decided to visit the Emerald Isle this time around, so if you’re down for some luck o’ the Irish, 4x Clover should be your #1 choice!

It’s a traditional Irish-themed slot machine, so expect a lot of rainbows and pots of gold, as well as Wild Multipliers and complimentary spins.

Grab onto that Four Leaf Clover!

The dynamic team of passionate developers from Great Britain is once again making history with a revolutionary slot, 4x Clover. To hit extra spins, players will have to summon the top symbols, while the multiplier of up to 4x for a bigger win potential might have them shouting ‘Luck of the Irish’!

Once you get to the Emerald Isle, expect to see vibrant rolling hills on a standard 5×3 reel grid. The game’s win lines are active and pay for any two higher symbols or three, four or five of a kind low value images. Among the icons are 7s too, and they can award wins when mixed, including a harp, hat and a pipe.

Keeping an eye on the Four Leaf Clover Wild symbol is key to making greater wins. It can substitute for all paying symbols and multiplies, adding a 4x wild to combos. Multiple Wilds also multiply each other, reaching up to 16x, 64x or 256x in total.

Nonetheless, the multiplier action continues when five wilds land on an active payline. In that case, players can receive a massive 1,000x their bet, which literally equals to finding a pot of gold at the end of the rainbow.

At last, triggering some leaping complimentary spins will bring up to 16 cycles free of any charge. During this mode, only the top symbol, 4x Wilds and scatters are available.

Lloyd Butler CEO at Live 5, said about the game: “Irish-themed slots are all about fast-paced gameplay, jolly features and plenty of big win potential. 4x Clover offers all of this and more thanks to its Wild Multipliers and generous Free Games bonus round.”

Take a Stroll Across the Wild West

If you’re into another Wild West shooter, make your own legend in The Game With No Name, an earlier release by Live5.

In this magnificent representation of the American West, players must take a walk through the saloon on a 5x4 reel set, built on an All-Ways-Pay grid.

The game is full of cacti, hearts, spades, diamonds and liquor symbols, but wilds can drop at any moment to increase the win potential. Keep your eyes peeled for the Gold Sheriff Badge symbol though, as it triggers honorary spins for an even greater streak of lucrative rewards.

Irish-themed slot always boring to me, nothing interesting with pots of gold, but this one has so many wild multipliers, what's the trick, I'm curious to see what will happens.

The game looks simple and seems to give you back wins, but you'd have to play it longer to really know the deal. I’ll try my luck one more again!