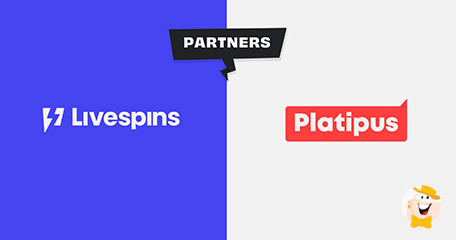 Strongly determined to socially charge player experiences via its innovative streaming and bet behind platform, Livespins keeps welcoming new studios to its rapidly growing network of associates. The most recent reinforcement is no other than Platipus Gaming, the innovation-driven developer of HTML5 slots and table games.

Players who visit crypto-friendly CasinoFriday will get the opportunity to check out some of the best releases coming from this creative workshop. 7 & Hot Fruits, Wild Spin, and Joker Chase are just some of the many adventures to be streamed across the innovative platform.

Top-Class Action Across the Reels

As mentioned in the introductory part, the streamer is in a successful partnership with CasinoFriday, so Platipus’ content will be broadcasted from this operator’s platform. Being among crypto-friendly companies, this operator has a massive content portfolio, multi-lingual customer support, and a wide variety of promotional offers, including the Spin Booster rewards scheme.

“Platipus Gaming has earned a reputation for developing slots that stand out in game lobbies thanks to their striking design and big sound. Gameplay is also next level, with its slots packed full of features and bonuses.”

Aside from keeping track of the action across the reels, the cutting-edge platform allows viewers to get directly involved by betting behind the streamer. Although it is a group bet, each player can set their own bet value and adjust the number of spins.

One of the crucial focuses of this streaming gang is social interaction, allowing players to communicate with the streamer and each other throughout the entire session. On top of that, there’s a possibility to add reactions to the explosive gameplay taking place throughout the stream.

“We are thrilled to have joined forces with Livespins and for its streamers to be able to play our games and broadcast the action to their audiences. Streaming is absolutely the future of online casino and this partnership enables us to leverage its huge potential.”

So far, Livespins joined forces with numerous forward-thinking studios. January 2022 brought a strategic deal with Fantasma Games, while March was marked with the iSoftBet partnership. In April, the company aligned with Yggdrasil, while in May they signed an agreement with Skywind Group.

Part of the industry since 2014, Platipus Gaming conquered players with its eye-catching HTML5 slots and table games that stand out from the crowd.

Willing to explore a variety of themes…

The most recent addition to the catalog is Ways of Gauls, which displays between 108 and 12,348 ways to win in each spin. Wilds, Scatters, multipliers, Gauls Shields, and Extra Potion Feature are just some of the many powerful elements designed to spice up the winning potential of the game.

Striving to offer consumers both entertaining and safe products…

…the studio acquired certificates by iTech Labs for the jurisdictions of the UK, Italy, AGCC, Denmark, IOM, Malta, Gibraltar, Sweden, and Romania. So far, the provider has aligned with an impressive number of operators and aggregators, among which BitStarz, Parimatch, SoftSwiss, SoftGamings, EveryMatrix, and more.

“welcoming new studios to its rapidly growing network of associates”

Yeah, streaming does give a completely new perspective of games, especially with the possibility to communicate with the streamer and add reactions.