Lucksome Unlocks the Secrets of Egyptian Deity in Gates of Etherea 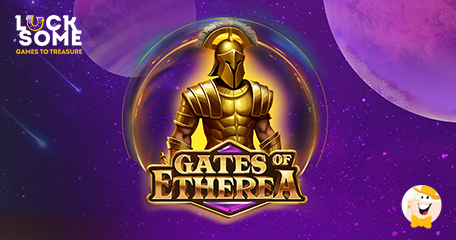 Up and Coming Studio Returns with Ethereal Riches of Ancient Times

Get a hold of ethereal riches in the latest release from Lucksome, featuring Bonus Buys, and even two math profiles!

One of the youngest online casino game developers on the market, Lucksome, is calling out all players to discover the wonders of Ancient Egypt and feel the power of the Goddess Isis in its most recent slot release, Gates of Etherea.

A Glimpse into the Past

After presenting a real hit in July this year, Bon Bomb Luxpots, featuring Megaways and a maximum potential of 25,000x the bet during complimentary rounds, Lucksome is paying tribute to the forgotten gods of Egypt!

The studio’s latest slot release is playing out on a 5-reel grid, and it brings hours of action on the increasingly popular 3-4-5-4-3 row configuration. In addition, Gates of Etherea features two Guardians who are the key to unlocking bonus rounds and potentially big wins.

In addition, you can charge up the Guardians of the Gates by landing four or more Portal Scatter symbols in a single spin. If you have them fully charged at some point, they will open the gates to 12 honorary spins.

Meanwhile, filling the screen with all 19 Portal symbols will eventually trigger the 5000x maximum win!

Keep in mind that the complimentary spins round gives you the chance to combine other features like wild multipliers, scatter wilds and high-pay symbols. For example, landing 10 Portals during extra spins can retrigger the bonus, and even award another 12 rounds.

In case you’re in a supported jurisdiction, there is also a configurable option for Bonus Buys.

Bryan Upton, founder at Lucksome, commented after the launch:

“Following our run of successful game launches we really see Gates of Etherea™ as the perfect end to our Q3 release activity.”

He also said that the game was designed to appeal to a global audience. The studio now specializes in localized marketing material and provides support in 15+ languages too. There are even two volatility profiles as well as a configurable Bonus Buy in some jurisdictions.

Gates of Etherea is available in 94% and 96%  versions, the company said. They are confident that the latest rollout is going to be a real hit. As announced, this title will hit lobbies around the world from September 22nd, 2022.

Coming right up this month is a 5-liner of fiery fun with a maximum potential of 1000x the bet, called Coins on Fire! Lucksome, a 2021 launched studio by Blueprint, is bringing a brick-and-mortar title with locking wilds where a full screen of these substituting symbols can pay 80x  per respin!

You will also be able to lock your wilds, get the minimum bet back, earn more respins, and keep hitting great rewards thanks to the medium-high volatility model. The range of bets expands from $0.05 to $250 per spin, and Lucksome translated Coins on Fire in more than 21+ languages!

Stay tuned and wait for the official release, you will not regret it!

“discover the wonders of Ancient Egypt”

Very interesting slot. Just saw video review of it. Hope to try Gates of Ethrea at one of casinos I used to play when they add it. Since it is already released I'm not able to find casinos with this slot available. By the way, rtp is not so bad)

Good looking game wasn’t even aware of this studio, they did a great job! Keep it up!!