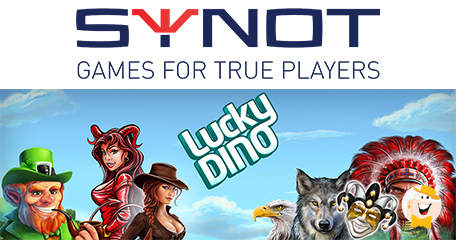 After recent expansions to Denmark and the Czech Republic, SYNOT assiduously continues the series of partnerships within the Finnish market by reaching a distribution deal with Lucky Dino.

This agreement shows a growing interest in SYNOT’s digital content, as Finland represents the 18th market, where the provider launched a full portfolio of 26 original slots and other offerings.

As stated by Matej Sopoci, chief product officer of the internationally acclaimed gambling brand, the expansion throughout the Nordics boosts the company’s motivation to go even further and create better content for the players in the future.

A Key Brand in Finland

Upon the completion of the integration, Lucky Dino players will gain access to a premium selection of infinitely engaging slots, available on multiple devices and platforms.

The Finnish online gaming operator entered the iGaming market quite recently, but it has proven to be a formidable force in the industry, especially in Finland. Thanks to its high consistency in terms of bonuses, offers, and other perks for unlimited game opportunities, the Lucky Dino casino brand established itself as a key player in multiple jurisdictions. In addition, it holds an operating license from the Malta Gaming Authority.

On a side note, the parlor is available in four languages, including German, Swedish, Finnish, and English.

“We strive to provide our markets with the best quality content. SYNOT Games provides what we’re looking for and already managed to set the bar high with it’s offering. We hope to see our relationship grow in the common effort to attract more players on the German market,” commented Antti Ukkonnen, online casino manager.

Players can also start exploring the portfolio of Lucky Dino by checking other favorable SYNOT titles such as Alchemist’s Gold, Book of Secrets, Hell Mania, or Respin Joker.

This casino participates in LCB Member Rewards, allowing new depositors to earn $3 chips and redeem them in our Shop.

At this year’s MiGEA, Malta’s iGaming Excellence Awards, SYNOT Games received an accolade for the Best Rising Star in the industry. This prestigious title perfectly reflects the studio’s rapid growth, as it sets up strong footprints throughout entire Europe. In June, the supplier signed a partnership with iGaming Platform, a complete white label solution for deploying the most engaging casino experience.

A month later, the content provider acquired a license in Portugal and entered into an arrangement with Solverde Casinos & Hotels, an entertainment company founded in 1972.

Among other content distribution deals are also partnerships with the Betclic Everest Group and Superbet from August.

i have been a fan of lucky dino casino since a few years ago (five or four i dont remember very well) and im always pleaased to play in there... is just great that they are looking for get bigger and bigger... expansion in an online gambling site is always a positive thing and i am already excited to play in the new slots......

i have been a fan of lucky dino casino since a few years ago (five or four i dont remember very well) and im always pleaased to play in there... is just great that they are looking for get bigger and bigger... expansion in an online gambling site is always a positive thing and i am already excited to play in the new slots... i hope i can play it soon... goodluck to all players that are going to play in luckydino.