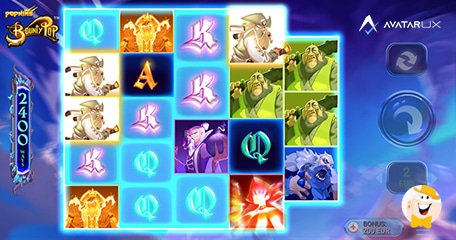 Just a couple of days after the bombastic presentation, BountyPop, a pirate-themed slot game coming from AvatarUX's creative workshop is hitting the headlines again. After triggering a bonus round, one fortunate punter grabbed a juicy win of 1.7M SEK.

As a small reminder, this colorful release, fourth in the popular PopWins™ slot series was done in cooperation with one of the leading gaming specialists, Yggdrasil Gaming. It was officially launched on November 30.

Want to hear more about how the win was triggered? Stay tuned to find out!

How Did the Win Happen?

After placing a 200SEK bet on the BountyPop slot, the punter activated a bonus. Three scatters appeared, and to add more fire to the reels, the player used the gamble feature on those additional spins.

So, instead of six…

…those complimentary rounds leveled up to nine. Round after round, the suspense gradually grew, and then- on the 4th spin the bronze wheel unlocked. The fifth round raised the temperature additionally, as the Silver wheel unlocked.

The sixth round was a “dead” one, but the seventh activated the Gold wheel, which was the “guilty one” for the fine winning sum of 17,740SEK. When the bonus gold wheel landed on the arrow to the inner ring on the first spin stopped on x100, and BOOM.... a 1,748,000 SEK win!

On learning the news about the winner, AvatarUX's MD Marcus Honney commented:

''This is the biggest payout ever for AvatarUX, for it to happen on our newly released game, BountyPop™ just makes it even more special! This player has experienced everything AvatarUX's PopWin™ mechanic can offer! From Popwins, the 'Gamble extra spin' option, and our 'mystery bonus wheel'. We love seeing our game mechanics in action and delivering an awesome experience for players.''

Wanna see how it all happened? Take a look at the official video of this massive win on the BountyPop slot!

Inspired by buccaneers, BountyPop™ slot recreates the atmosphere of a classic video slot spinner in an arcade. Equipped with a multiverse of powerful features, it’s a highly actionable adventure with more than solid rewarding potential.

Among the incorporated mechanics…

…punters can discover PopWins, Gamble Extra Spins option, Buy Bonus, and Mystery Wheels that offer different prizes on the inner and outer rings. Those who dare to walk the planks in this 5x3 story could have the opportunity to unlock the Golden Wheel. Packed with nine symbols, it is home to multipliers ranging from x3 to x100 rewards.

Other Titles from PopWins Collection

The first one in the series was the PopRocks™ slot with a max win potential of 72,188x bet. Featuring the shiniest gemstone, this title premiered the producer’s cutting-edge PopWins mechanic. With the ability to pop, multiply, and expand, those valuable stones could bring up to 33,614 ways to win.

Joining Yggdrasil’s YG Masters program in February 2019, the studio was instantly recognized as a brand with excellent potential and an inventive approach.

“one fortunate punter grabbed a juicy win of 1.7M SEK”

wow that is 200,000 buckaroos where i come from ..Excellent hit my friend. I do not know if this game is available in the casinos I play but i will find out for sure. congrats to the huge win!!!

Great! This looks crazy. I hope the winner will enjoy it :) I sure will

Wow, amazing win..congrats to the winner!

Congrats to the lucky winner!