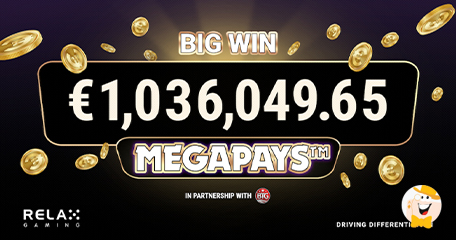 Some five months after bringing a new technology to the market, revealed as Megapays, Big Time Gaming has once again justified its name as the world’s leading innovator by turning a lucky player into a millionaire thanks to the developer’s top brand game – Who Wants to be a Millionaire.

Just as the iconic, award-winning game show has confirmed on multiple occasions, Who Wants to Be a Millionaire Megapays is now also a bona fide millionaire maker, giving each fan of the international television spectacle a chance to climb the money tree and walk away a rich man.

A Millionaire Out of the Blue

The last week of October 2021 will be remembered as a special occasion for one lucky player who has managed to hit the jackpot and win an astounding amount of money on BTG’s branded hit slot from August 2021 (worldwide release date) Who Wants to be a Millionaire Megapays and cash in €1,036,049.65 from a bet of just €0.70!

After doing some math, you will be surprised to know that it’s a 1,480,000 per cent return on investment for the winner.

By the way, the lucky strike happened at Betfair Casino, an online gaming site that is powered by Relax.

The occurrence is also the first time this game has paid out a seven-figure sum in the 12 months since its exclusive release in September 2020.

It faithfully captures all the nail-biting drama of the TV show, only BTG’s unique, patented Megapays system contributes to even more action and excitement. The technology is exclusive to Relax Gaming, ensuring that Who Wants to be a Millionaire Megapays may easily become a game-changing global jackpot machine that drops more frequently, giving countless opportunities for the players to win.

There are four Megapays Jackpots available during play: Mini, Midi, Major and Mega. However, all are progressive, meaning that every time a bet is made, a portion of it is added to the pool.

As a special treat, the slot even includes the ability to gamble the total free spin win, putting each contestant right in the gameshow’s hot seat.

An Increasing Database of Players

According to Nick Robinson, CEO at Big Time Gaming, subsidiary of Evolution since April 2021, it was only a matter of time before someone struck a mega prize on Who Wants to Be a Millionaire Megapays.

“This game has got so many plaudits and won so many fans over the past 12 months, and we’re delighted that the life of one of those fans has been changed forever,” concluded Robinson.

Chief product officer at Relax Gaming, Simon Hammon, added that it is always a pleasure to “drive differentiation by collaborating on industry-defining games and mechanics”. The CPO hopes that the recent winner will enjoy their life-changing sum of money to the fullest and looks forward to new lucky players in the future.

“BTG’s Who Wants to be a Millionaire Megapays Pays Out Over €1M on Relax Gaming Platform”, Miller, George, europeangaming.eu, October 27th, 2021.

“the technology is exclusive to Relax Gaming”

Congrats to the lucky player! U should definitely play this game more often!