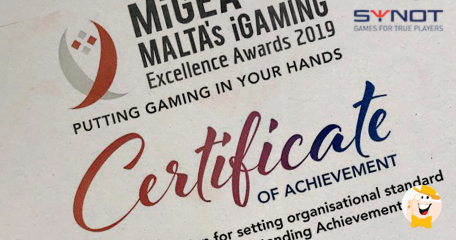 Malta’s iGaming Excellence Awards for 2019 took place on the 17th of May at Malta’s Smart City venue.

Overall, during the ceremony, 19 different awards were handed out, rewarding Malta’s most innovative gaming entrepreneurs.

SYNOT Games was one of the rewarded participants gaining the title of ‘most promising newcomer.’

This developer won Malta’s BEST Rising Star in Gaming Award, which is one of the most prestigious titles of this event. The success is greater when considering the fact that the brand received its MGA license just three months ago.

Even though SYNOT has been nominated for 5 major awards, in the end, it took home the most prestigious one.

Malta’s Best Rising Star in Gaming award perfectly reflects the skyrocketing growth of this developer in the past year.

“This prestigious award is of significant importance for us, being the first award in recognition of our results. I would like to thank the whole team for making it possible and also to the organizers for hosting such a fantastic event,” commented Martina Hrabinská, SYNOT CCO.

"We are truly honored by this victory. It motivates us to continue in our hard work, constantly innovate our portfolio, while following global trends and specific market requirements.

Most importantly, to keep bringing maximum customer comfort and entertainment value. We are glad that our new Maltese company was able to get 5 prestigious award nominations and turned of them (Best Rising Star) into a clear win," he stated.

In early 2016, SYNOT Games was founded as a new division of SYNOT Group. This unique gaming content provider is based in Bratislava, Slovakia, unlike the company headquarters.

Nowadays, their team counts more than 30 people and develops around 20 diverse slots each year.

SYNOT Games is using the latest technological achievements, like HTML5 technology, in creating its slots. That makes content from this provider available in qHD, HD and Full HD resolution on any device, with both iOS and Android platforms.

It can legally operate in the gambling markets of:

Certification for Sweden, Denmark, and Portugal are pending.

MIGEA or Malta’s iGaming Excellence Awards is an annual event, open to all gaming business entrepreneurs operating in Malta.

It is the most premier and largest Gaming awards in this country. MIGEA was created in 2015 with a goal to honor the efforts of entrepreneurs and their contribution to the iGaming field. Also, it serves to generate public recognition of the achievements and positive contributions of local gaming working professionals.

Malta’s iGaming Excellence Awards has become one of the region’s most coveted and sought business prizes in a very short time. Now, it serves as the annual event that everyone in the industry wants to be a part of.

“SYNOT Games was one of the rewarded participants”