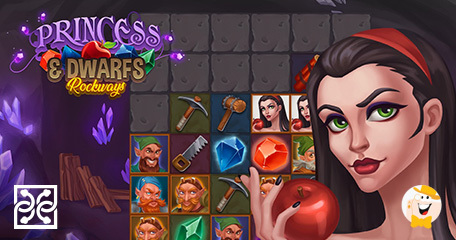 Inventive Studio Presents Its Take on a Traditional Theme

Drawing inspiration from one of the most popular tales, Mascot Gaming, an innovative provider of online casino games announces The Princess & Dwarfs: Rockways. Developed in cutting-edge HTML5 technology, this colorful release bolsters no less than 46,656 winning opportunities.

In terms of features, this highly volatile slot is home to all sorts of rock-tastic elements, such as RockWay Feature, Rockfall Feature, Rockfall Multipliers, and many other surprises. Thanks to a generous betting range of 0.25 to 2.50 per spin, this title is perfectly suitable for all budget levels and playing preferences.

As for the structure itself, the game is set on a 6x6 grid, displaying between 64 to 46,656 winning combinations. The RTP is set at 95.19%, while hit frequency amounts to 32.2%. Thanks to high volatility, this release secures rare but massive wins.

Let’s Grab Some Precious Stones, Shall We?

The entire story takes place in the enchanted cave, which adds more magic to the gameplay. Making the game additionally captivating are excellent illustrations, and a fantastic selection of colors, which altogether results in an authentic atmosphere.

Paying attention to other games in the producer’s fast-expanding portfolio, one will notice a wide variety of different themes, which confirms that the studio is not afraid of exploring versatile topics. Merlin’s Tower, Fruits of Luxor, Dragon’s Nest, Wild Spirit, Zeus the Thunderer, and Book of Amaterasu are just some of the many adventures found in the developer’s catalog.

A Closer Look at Mind-Blowing Features

One of the key symbols in the game is Princess with a red apple in her hand. She acts as the mystery symbol and has several different roles.

Aside from being the ordinary wild…

…which replaces all other icons to form winning combos, it can transform into an expanding wild to fill the entire reel. This happens if the Princess hits the reels during a free spin round. Finally, if four or more of these icons appear on the reels during the main game, they become Bonus symbols.

Speaking of the free spins feature, it is depicted as The Dynamite symbol and lands only during a bonus game. The Golden Coins symbol is the multiplier of the slot.

Yet, the list doesn’t end here, as Mascot Gaming wanted to offer something truly extraordinary. In addition to the abovementioned, this slot has multiple unique elements.

…there’s Rockways Feature, which ensures a wide range of possible winning combinations. Activated with a winning game round either in the base game of free spins mode, Rockfall Feature treats players with up to x5 or x15 multiplier, respectively.

Finally, there’s the Risk & Buy Feature which puts consumers before quite an interesting choice. They can either risk the current win to activate the Free Spins feature or buy the Bonus game at a specified price to access this mode immediately.

“perfectly suitable for all budget levels and playing preferences”

I guess it's fairytale time, good features I will try it.

With all these great features, one can surely expect lots of action taking place on the reels.