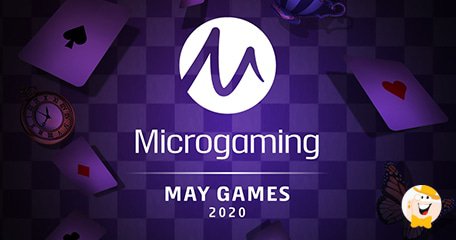 Continuing to deliver a wealth of games each month, Microgaming introduces the newest additions which will be launched during May. Developed exclusively by its roster of independent studios, the upcoming releases will bring plenty of variety and choice to its customers.

Among the announced games there are titles by Triple Edge Studios, All41 Studios, and Stormcraft Studios. What comes as the biggest surprise of all is a new progressive JP, which will join the provider’s market-leading progressive jackpot network.

“May brings a host of new and exclusive games to Microgaming’s award-winning content aggregation platform, including the addition of another exciting title to its progressive jackpot network, featuring the Mega Moolah jackpot. Filled with charm, exciting gameplay, and fantastic mechanics, Microgaming operators will be spoilt for choice this month and can look forward to our games roadmap for the months ahead.”

Coming from creative minds gathered in Triple Edge Studios, Absolootly Mad Mega Moolah™ is the newest extension to a globally leading progressive JP network. Up to date, the network has paid out €1.1 billion.

… is home to stunning graphics, and a catchy soundtrack. Packed with Rolling Reels™, and an increasing multiplier trail, it comes with up to a maximum of 15x multiplier, activated during bonus rounds. As the players collect golden coins to fill the teapot, the chances of reaching the Jackpot Bonus Wheel gradually grow.

It’s Time for Something Elegant!

Drawing inspiration from the luxurious atmosphere of the world’s most opulent casinos, Lucky Riches Hyperspins™ is an excellent homage to old-school entertainment.

Packed with the popular Hyperspins™ mechanic…

… this five-reel slot comes with 243 ways. With the opportunity to pay to respin individual reels, players can either try to complete winning combinations or enter the bonus spins feature, wherein all wins are multiplied by 3x.

This vintage-looking glamour is expected to be introduced on May 7.

Duet of Surprises from All41

Scheduled for May 12, Electric Avenue takes players on a retro journey to the neon 80s filled with electrifying visuals and sounds and music from the era.

Structured as a six-by-four grid…

… it comes with up to 4,096 ways to win enabled during bonus spins. Equipped with a multitude of extra rounds coupled with sticky Power Wilds, or the Wild Wheel with high multipliers up to 55x, it’s all about good vibes and massive winning potential.

Another addition by All41 Studios, announced for May 19, is All Win FC, a highly volatile, five-by-three reel, 10 payline slot.

Capturing the essence of a football match…

...it displays not only face-painted fans, colorful flags, and jerseys, but epic trophies as well. Landing wilds, landing wilds that unlock added spins, and symbol upgrades are just some of the key details responsible for energetic action which characterizes this release.

How About More Football?

The month of May brings another treat for football fans, this time from Stormcraft Studios. Expected to arrive on May 28, this five-by-five slot allows players to select their betting option from 18, 38, 68, and 88 lines.

…Football Star Deluxe hosts a generous assortment of features such as Rolling Reels™ with a multiplier trail up to 8x, extra spins with Super-Stacked Growing Wilds™, and Striking Wilds™, unlocking great win potential.

“Microgaming brings sport, magic, and a new progressive slot to its May lineup”, microgaming.co.uk, May 4, 2020.

“titles by Triple Edge Studios, All41 Studios, and Stormcraft Studios”

I started to play microgaming recently. I am getting surprised at the variety of slots. Many new slots are provided by different studios, so they are quite different from each other. Very fresh and new. From the video clip above, Lucky Riches Hyperspins, doesn't look really new, though. Anyway, it should be good game...

I started to play microgaming recently. I am getting surprised at the variety of slots. Many new slots are provided by different studios, so they are quite different from each other. Very fresh and new. From the video clip above, Lucky Riches Hyperspins, doesn't look really new, though. Anyway, it should be good game to play for big money!!! :)

Great job for Microgaming. May seems to be ahead of us with a lot of great games.

Microgaming working hard during May, all fans look forward to the newest additions and all seems interesting!

I think Microgaming's hit the jackpot with these deals with independent studios. These games all look so amazing and spectacular, themes and features are awesome!