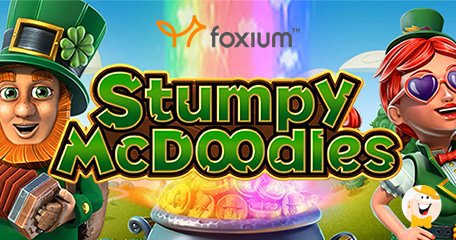 Different cultures and folklores serve as an eternal inspiration to content producers, and the independent team of developer Foxium tried the luck with Ireland. Putting their own stamp on this frequently used topic, they went live Stumpy McDoodles, adventurous leprechaun which plays the main character of their most recent slot.

Besides being packed with expectedly plenty of Irish-themed symbols, the game is equipped with versatile features, which all together bring immersive gameplay. The 4x5 title is optimized for desktop and mobile devices and can be played both in portrait and landscape mode.

Foxium CEO Åke André shared his thoughts on the freshest addition to the catalog:

“At Foxium we believe in making every concept and every story our own, which is why Stumpy McDoodles stands out from the crowd of other Irish-themed games. As well as being another opportunity to deploy our game-changing FoxifyTM feature, Stumpy McDoodles is also the latest showcase for the strong creative design, characterization, and gameplay that make Foxium’s slots so sought-after by players in a range of different markets. Packed with features and fuelled by a thigh-slapping soundtrack, Stumpy McDoodles is the party that never has to end.”

Stumpy McDoodles, a prankish leprechaun, is the most representative example of his kind, equipped with a green stovepipe hat and a bottomless thirst for beer.

Besides Stumpy, punters have the chance to meet his partner Penny…

…a typical strong and opinionated female character seen in a multitude of Foxium’s games. Combining a bit of both, she’s seen wearing standard green garb but paired with, perhaps an unexpected accessory in the form of heart-shaped sunglasses.

The cheerful duet is in charge of keeping the atmosphere at the highest level possible, and guide the players to the untold riches scattered among the rolling green hills.

The joyous couple leads the party through the vast fields, and as the procession goes on, the pot of gold scatter can land on any or all of the odd-numbered reels. When all three are filled at the same time, they award 5 extra spins, as well as the opportunity to pick up the pace even further by collecting coins and building a progressive multiplier.

… a Rainbow Respin will activate, and the remaining odd-numbered reel will respin on its own. This opens the possibility for more complimentary spins. During this session, collectible Multiplier Coins that boost the current multiplier value up to 3X can randomly appear. Wild Coins add shifting wilds to the reels, which relocate themselves with each spin.

Check out the official Stumpy McDoodles trailer and let us know if you liked it in the comment section!

“Jump into a never-ending party with Stumpy McDoodles, from Foxium”, Foxium newsletter, December 17, 2019.

This game is all about more spins, and I must say I like it. I’m not so crazy about the leprechauns, to admit, but this one seems okay. All those features keep it dynamic all the time and with so many spins, the reels just keep rolling and rolling…