Microgaming and All41 Studios Introduce a Duet of Megaways Slots 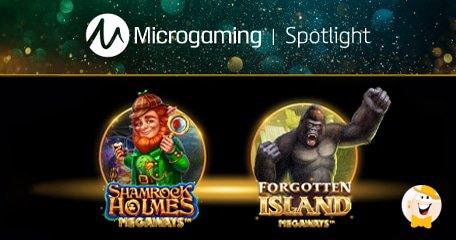 Following the historic deal penned between Microgaming and Big Time Gaming (BTG), the Isle of Man gaming giant got the opportunity to take advantage of BTG’s Megaways tool. As earlier announced Shamrock Holmes Megaways slot, done in partnership with All41 Studios, is the one to break the ice.

But, the great news is that it’s not the only one to exhibit this cutting-edge mechanism, as Forgotten Island Megaways, produced with the same independent provider, is another slot scheduled to be presented on 26th November. Make sure you mark it on the calendars well, as this day Microgaming Spotlight series plans to showcase both titles.

In October 2020, the gaming giant inked a deal with BTG to gain access to their trademark Megaways mechanic, and incorporate it in the upcoming releases. Shamrock Holmes was announced as the first one to hit the shelves, crowning this successful cooperation.

…this inventive mechanism immediately grabbed the attention of the community, bringing a new perspective to the commonly seen slot game structure. Wanting to extend the universe comprised of paylines, Big Time came up with hundreds of thousands of possible winning ways, electrifying the reels maximally.

As for the deal with Estonian studio, All41 joined Microgaming’s network in May 2019. This ambitious Tallinn-based game provider gathers knowledgeable and passionate gaming enthusiasts with a wealth of experience.

There are so many games paying tribute to this iconic detective, but Shamrock Holmes Megaways is unlike any other Holmes-themed adventures presented so far.

…this Irish-themed release brings medium volatility and 117,649 ways. Packed with a selection of features, it maintains a high level of action.

When 3 scatters and high symbols (pixie or leprechaun) on extra reel appear, they award Magic Forest Re-spin with guaranteed Megaways. Each Rolling Reels feature activates multiple consecutive wins per round. Worth adding is that max win multiplier is unlimited.

Taking punters to Skull Island, this game introduces them not only to enormous gorillas but a whole spectrum of humongous beasts.

While on the surface…

…Forgotten Island Megaways slot brings different visuals, everything else is more or less seen in the above-described Shamrock. Thanks to Rolling Reels, Kong spins and bonus rounds, this release lacks no action.

When four scatters (portrayed as Kong) land on the reel, they bring 10 complimentary rotations. Any extra scatter awards two more extra spins at the beginning of the round. Just like the premiering title, it displays 117,649 ways. Max win potential is a 7,000x bet.

Some Food for Thought

Microgaming is not the only leader who leverages the benefits of Megaways mechanics. NetEnt’s evergreen classic Gonzo’s Quest got the same treatment -courtesy of Red Tiger.

In your opinion, which of these titans brought a better and more immersive story- Microgaming or NetEnt? We’d like to hear your two cents on this, so hit the comments section below!

“the opportunity to take advantage of BTG’s Megaways tool”

Microgaming and Megaways in one place- sounds like a formula for success to me!