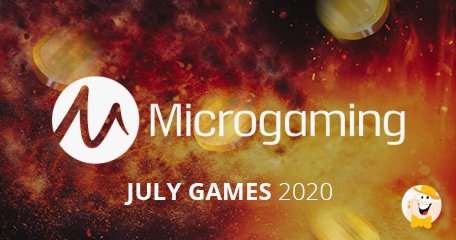 A new month is knocking at our door bearing gifts, and Microgaming is ready to present the next supreme batch of augmented gaming content for July. The studio’s fresh drop of exclusive titles is designed and created by a growing network of partner developers, primarily Snowborn Games, All41, Just for the Win and Triple Edge, so let’s take a closer look.

In addition to its regular deployment of games each month, we will also see a wealth of titles from other content distributors throughout July, including Crazy Tooth, Skillzzgaming and 1X2gaming, so stay tuned.

From Miami to Inferno

Scheduled for launch right at the beginning of this month is Miami Glow, a vibrant slot inspired by the 80s with a colorful 5x3 reel setup that carries a colossal win potential of up to 12,500x total bet. The game is created by Snownborn and it comes with a medium-high volatility level, 10 ways to win plus a moderate betting ratio from 0.2p to $20 for a spin. Among the featured highlights are extra spins, random multipliers, respins, sticky wilds and stacked symbols.

Following the release of July’s icebreaker, players will have an opportunity to soar deep into the jungle on Tuesday, July 7th as All41 Studios rolls out a six-by-five reel slot with high volatility, called Mayan Eagle. It offers a staggering 15,625 ways to win mechanic and the all-new Nobleways.

In this extravagant game with the Rolling Reels™ mechanic, users will be able to blast away winning combos and add new symbol cascades onto the reels for huge wins. The background story features eagles who soar against the ancient Mayan ruins while scatters potentially spell MAYA on the board to grant entrance to a thrilling complimentary spins game with an increasing multiplier. The overall win potential during this round is 13,000x the initial bet.

Coming up next on July 14th is Immortal Glory, another impressive take on the ancient Rome and Gladiator arena. Players destined to enter the legend will play this highly volatile edition on a 40-payline grid, backed with a jackpot and win potential of 10,000x as well as fiery stacked wilds, Glory Spins and more.

Among the upcoming releases is also Arthur’s Gold, officially scheduled for July 9th. It is developed by Gold Coin Studios, another remarkable partner of Microgaming whose expertise invites players to an empire of riches followed by complimentary rounds, respins, expanding wilds and a massive win potential of over 4,000x.

At long last, the grand finale of the month will feature Diamond Inferno, developed specifically for the fans of fiery graphics and intuitive gameplay coming straight from Triple Edge Studios. This addition to the retailer’s portfolio also comes in a retro design with classic casino icons, golden bars, sevens and lucky dice, plus a medium volatility, expanding reels, respins and diamond scatter wins.

Powered by 50 ways to win, the studio’s latest title also features a multiplier of up to 10x total bet for a greater win potential. To discover more, take a look at the preview below:

“created by a growing network of partner developers”

Microgaming is one of my all-time favourite provider and I'm glad to see they are pushing their limits and provide us with qualitive new releases. It seems that the games are getting more and more visual appealing in the recent years. Not a bad thing at all, but there should be an option for high/low graphic settings....

Microgaming is one of my all-time favourite provider and I'm glad to see they are pushing their limits and provide us with qualitive new releases. It seems that the games are getting more and more visual appealing in the recent years. Not a bad thing at all, but there should be an option for high/low graphic settings. There are numerous slots which make my laptop temperature higher than most of the 3D games I play.

Microgaming is awesome! I love the new games they produced like, Aliya's Wishes (perhaps my favourites of all time), the Vault and Aurora Beast Hunter. Keep up the great work you 'guys' ( term not meant to be sexist or anything).

Another great month of graphically superior slot releases from my favorite studio. However, I believe it’s going to get a lot more interesting this Summer... can’t wait for the new GoT revamp and Deadmau5!!!! Please hurry LOL.