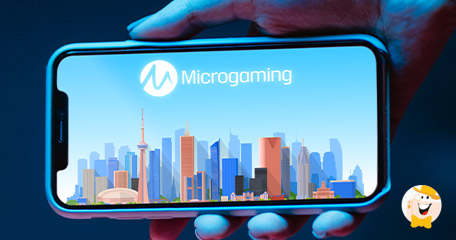 As the newly regulated North American market comes out of the shadow to greet its first software providers and their entire portfolios of high-ranking iGaming content, a new name from the Isle of Man emerges on the same list, announcing further expansion on the international gaming scene.

The provider of a powerful line-up of new and exclusive iGaming content solutions will launch its rich library in the Canadian province this week, bringing some 300+ titles online in this part of the world for the first time.

A Plethora of New and Legendary Slots

As announced earlier this month, Microgaming will be joining some of the industry’s most renowned software suppliers in Canada, after receiving approval from the Alcohol and Gaming Commission of Ontario (AGCO).

The world’s leading online content aggregator is bringing along a collection of 300+ exclusive games, including new and legendary online slots.

To celebrate this special occasion and mark the entry to a new exciting iGaming market, Microgaming is gearing up to present its first ever ringfenced progressive jackpot title, called Maple Moolah. It will be exclusive to Ontario players, and this brand new take on the iconic Mega Moolah slot game will seed at a sweet CAD $1 million, claims the supplier.

Residents of Ontario will also be able to get access to a popular selection of games developed by partner studios, revealed on a monthly basis.

“Now the Ontario market has opened, we’re thrilled to reveal the industry’s newest jackpot, Maple Moolah, which has all the makings of a market-leader,” commented James Buchanan, head of games at Microgaming.

The best thing about the provider’s latest rollout is the fact that its entire prize pool is secured just for the players in the province, and Microgaming can’t wait to see the first Maple Moolah millionaire.

April Roadmap Coming up This Week

Last month, we had a chance to see another powerful line-up of new and exclusivetitles from Microgaming and independent studios. Among the most anticipated games throughout March were Masters of Valhalla from Snowborn, 15 Tridents by PearFiction, Amazing Link Fates (SpinPlay), The Great Albini 2 (Foxium) and 9 Pots of Gold HyperSpins, developed by GameBurger.

This month, one of the first titles to go live will be Wildfire Wins, so if you’re looking for online casinos that accept players from Canada, get ready for a fascinating new collection of slots and have a good time!

“gearing up to present its first ever ringfenced progressive jackpot title”

Good news for players from Ontario. Microgaming should have been present there already.

Awesome news for Canadians, for sure :). It has been expected Microgaming will enter the Ontario market since many software providers have already joined. I am not surprised.