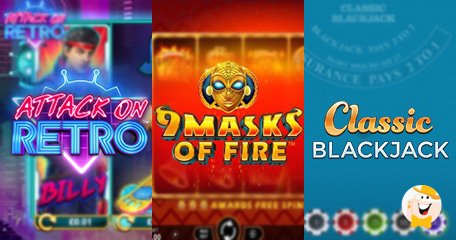 iGaming behemoth Microgaming and their network of content suppliers are preparing a memorable March that will see the release of 15 new slot titles!

The company has revealed the lineup of their premium titles to be rolled-out over the course of the month by their independent studio partners.

All of the games to be released…

…are features-rich and have a great deal of diversity and variety to them. Also, they boast some pretty popular themes, such as retro-styles, Irish-folklore, cyberpunk settings…all coupled with mechanics that boost the entertainment levels.

Attack on Retro was developed for Microgaming exclusively by Triple Edge Studios. It has a vibrant retro theme which takes players on a journey through the futuristic retro city. Two dapper cyberpunk protagonists, Billy and Jessy, are defending the city against robots

The game comes with a bit of 80s nostalgia and has a winning potential of 5000 times your bet. This 5x3 reel, 10 paylines slot has neon laser effects, high-tech gadgets and enjoyable features such as stacked and random Wilds. It has vintage techno soundtrack and 80s upbeat synthwave in charge of the atmosphere.

9 Pots of Gold was developed by Gameburger Studios and will be out on March 10th, just in time of St Patrick’s Day. The game is packed with treasures and features such as Pot Pays, extra spins and Extra Spins Wheel. The game is 5x3 in configuration and has 20 paylines.

Coming from Switch Studios is the latest blackjack title: Classic Blackjack: Six Deck. This will be the seventh version of the game by this studio. It is built on a new engine and features standard side bets – double down, insurance and split hands.

Treasure Skyland was developed by Just For the Win. Set among the clouds in a secret place with floating islands three pirate monkeys are on the hunt for treasure in the form of yellow gold bananas. The game will go live on 24 March and is packed with multiple features including Win Multipliers, Symbol Upgrade and Pick Bonus feature.

A top of these releases, Microgaming and their partners will release even more games during this month. Here is the breakdown and schedule:

“Continuing our commitment to providing our customers with a strong and varied games roadmap for the year ahead, we are delighted to add another mixture of exclusive and non-exclusive games to our content aggregation platform this month. March brings a wealth of colourful and engaging titles with dynamic themes, varying volatility levels and a wide range of features, offering rewarding and entertaining gameplay experiences.”

“revealed the lineup of their premium titles”

Honestly I still believe that that the old school Microgaming games were the best back in the day like your IR, Supe It Up etc. However the update flash/html5 games these games definitely do not play the same anymore. I see more and more vendors run of the Microgaming platform at certain casinos, like the old trada for...

Honestly I still believe that that the old school Microgaming games were the best back in the day like your IR, Supe It Up etc. However the update flash/html5 games these games definitely do not play the same anymore. I see more and more vendors run of the Microgaming platform at certain casinos, like the old trada for example who has BTG and NYX slots run of their platform and it the games play really poorly from the platform compare to the original platforms. Take bonanza for example, the one from the SG platform plays way better than the one from the MG platform. Microgaming for me personally are not in the mix lately and are dying to be honest. I cannot even remember the remake of Agent Blond 2 slot which was a failure from what I heard. Microgaming should stick to the old school 9 liners like break the bank etc as they were making the name for them.