Microgaming Presents a Sparkling Array of Exclusive Content All Throughout November 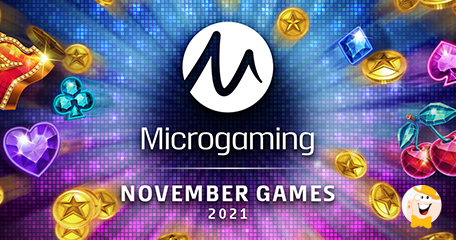 It’s time for another great month of exclusive iGaming content, as Microgaming makes a comeback just in time to present its sparkling collection of releases for November, powered by the provider and partner studios.

Since the month of October was focusing more on Halloween, players around the world will be thrilled to discover an inspiring mash-up of slots with cutting-edge mechanics and themes all throughout the next few weeks, so buckle up!

We start with a feathered frenzy on 4 November, as Lucky Clucks developed by Crazy Tooth Studio kick off the action with BIG BuildUp feature, allowing chickens to lay eggs that hatch into wilds and multipliers at random.

The farm-based slot will bring in more humor during the Raise The Roof Bonus, triggered by three or more scatter symbols. During this mode, the farmyard flock will help increase the number of ways with each spin and even drop sticky wild symbols on the reels.

The next stop is reserved for North American wilderness, as SpinPlay Games returns for a new Western escapade called Mustang Riches on 9 November. Prepare to see coyotes, eagles and rattlesnakes, alongside the studio’s new BlazingWays mechanics, allowing you to collect coins along the way and expand the reel set by increasing ways up to a maximum 7,776.

Expanding wilds on reels two, three and four will reveal the potential of the Wild West, ponying up wins of over 7,000x the bet. On top of that, landing lucky horseshoes may ensure free spins and let you choose between the number of complimentary rounds and initial BlazingWays.

A couple of days later, players can get ready for another trip into the wild and discover the beauty of Alaska in Kodiak Kingdom. Developed by Just For The Win, this title features Alaskan cougars, golden eagles, caribou, trout and the almighty Kodiak bear, followed by a dynamic 4,096 ways to win experience. It will be officially released on 16 November, carrying massive win potential at 25,000x the bet.

Hyper Star is scheduled for 23 November, as Gameburger Studios decides to introduce its next dazzling release in the ‘Hyper’ series. Imagined as a classic Vegas slot, this 5 reeler comes with 243 ways to win and takes its players for a night out on the town where massive jackpots, big win potential and enthralling club beats are powered by Rolling Reels, increasing multipliers and a massive 15x multiplier during free spins.

Finally, on 30 November, we will finally see 11 Enchanting Relics from All41 Studios. The game features its EpicStrike mechanic, Epic Pick and free spins with extra wild symbols. There are eleven tiers in EpicStrike, triggered each time an enchanting relic symbol appears on the grid. It invites players to unveil a glowing orb that can reach a 10,000x exposure.

Gameburger Studios will enhance its collection again this month by launching another seductive title, called Playboy Fortunes HyperSpins on 18 November. Thanks to the addition of the mega popular HyperSpins, players will encounter new immersive experience, better than the original!

Next, its La Racha in Don Bingote, an entirely new video bingo from Neko Games inspired by Don Quixote de La Mancha, going live on 11 November. There is a chance to win up to 5,000x the bet in this game.

If you’re a big fan of Gong Gaming Technologies, gear up for Royal League Zuma Riches on 22 November. It is packed with a randomly triggered Royal League feature, taking players further on an exotic adventure.

When it comes to live casino, Real Dealer Studios already presented this month’s favorite - Real Roulette con Tomas. It is available since 2 November entirely in Spanish and it belongs to the growing roster of Hollywood-style luxury offerings.

“sparkling collection of releases for November”

Keep up the great job! I can't wait to see the new releases.

A great month is ahead of us! So many surprises! Good luck LCB'ers!

A lot of exciting games to play in November :) Can't wait for the release of the 11 Enchanting Relics :)

Not only for November games, but they also keep doing an amazing job in general, that is why they are one of the leading brands. I am delighted with their continued successful work.