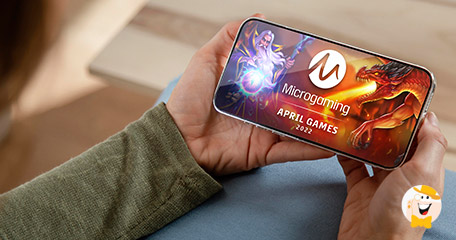 Microgaming, the award-winning online gaming software provider unveils a host of games scheduled to take consumers on the most exciting adventures throughout April. Some of the releases are already introduced, the others are set to hit the shelves in the upcoming days, but what all of them have in common is an amazing design, captivating story and a wide array of rewarding features.

As with the previous additions, slot adventures dominate the portfolio, with new titles coming from PearFiction Studios, All41 Studios, Alchemy Gaming, and more. Table games aficionados won’t be disappointed either, as Real Dealer Studios and Switch Studios will enhance the selection with some sophisticated Roulette and Blackjack variants.

On April 5, Alchemy Gaming went live with 25,000 Talons, a highly volatile slot that comes with an impressive top prize potential of €500,000 in the wheel bonus. Drawing inspiration from North American wildlife, the game comes with an abundance of opportunities to trigger the free spins feature.

Delivered by SpinPlay Games on April 7…

… Vegas Cash takes platers to the glitzy Las Vegas Boulevard. Organized as a 5x3 grid, it comes with a double set of reels, a massive jackpot potential of 5,000x, medium variance, Copycash™ wilds for reel-stacking rewards, and many other surprises.

Lots of Powerful Features on the Horizon

Set to go live on April 12, Gold Collector: Diamond Edition by All41 Studios is a 5x4 reel slot with 50 pay lines, high variance, and the popular Link&Win™ mechanic. When three diamonds or coins hit the reels, the mechanic is activated, giving players a chance to score big cash prizes or jackpot prizes of up to 5,000x.

Worth adding is that…

…this is not the only Link&Win™ release expected this month. Planned to go live on April 27, Fiona’s Fortune, an Ireland-inspired slot by Gold Coin Studios bolsters Express Collect™ for instant prize potential, bonus wheel, magical pots of gold, and lucky four-leaf clovers leading to bonus spins.

Gong Gaming Technologies plans to present an homage to fast cars and precious diamonds on April 13. Taking place on a 5x3 diagram, Royal League Spin City Lux brings 20 paylines, bonus features, scatters, and many other symbols which can trigger rewards. There’s also an opportunity to roll a dice on a bonus board and grab up to 10,000x.

Furthermore, Just For The Win is also among the studios that will contribute to enlarging the portfolio. Scheduled for launch on April 19, Wildfire Wins boasts sticky wilds, Wildfire respins with sticky wilds, and the Wildfire Wheels bonus. Let’s not forget to mention a special Wildfire Wheel Bonus with an opportunity to unlock even bigger prizes.

How about Some Dinosaurs, Magic, and Dungeons?

Punters who enjoy spinning the reels of dinosaur-themed online slots will be happy to hear that Crazy Tooth Studio will showcase Rhino Rilla Rex™ on April 21. Packed with 3,125 ways to win, this slot is home to Any Adjacent Pays™, Team-Up Reels™, where symbols combine to create new reels, awarding multipliers, bonus stacks for bonus spins, and epic win potential.

If you feel like casting spells and crafting potions…

…then don’t miss the chance to check out Magical Reels by Northern Lights Gaming starting April 25. When spell books hit the reels, the award multipliers or stars, each collected to fill a symbol’s Star Meter. Once the meter is filled, versatile surprises are unlocked- knock out symbols or more spell books for a potential of over 10,000x, to name a few.

Coming from PearFiction Studios on April 26, Dungeons and Diamonds is a 5x5 fantasy slot with 40 lines, instant collects, multipliers, wilds, and more. A detail worth stressing out is that this slot game has Wicked Wizard’s jackpots, one of which comes with a jaw-dropping win potential of up to €250,000.

… partner network studios under Microgaming network prepared a couple of installments to the April collection. Hacksaw Gaming presented Gladiator Legends on April 7, while Booming Games will unveil Khan’s Wild Quest seven days later, on April 14. Eugenio from MGA arrives on 25 April, Wolf Strike by Iron Dog Studios is scheduled for April 27, while Follow the Honey from Inspired Gaming is to be launched on April 28.

Switch Studios are releasing not one, but two games this month. Premier Blackjack with Buster Blackjack arrives on April 11, while Auto Roulette hits the shelves nine days later, on April 20. Both of them bring a modern twist and extra features to all-time favorite table games.

Finally, Real Dealer Studios release, widely famous for its games with cinema-quality video plans to add Dealers Club Roulette on April 25. Aside from a whole cast of dealers to choose from, the game incorporates multiple exciting new features including nine pre-set special bets and an alternative Racetrack board.

“amazing design and a wide array of rewarding features”

Oh how I miss Microgaming software casino, it is my absolute favorite of all time still is and I haven't played I think six or seven years since Bush.Yep USA

With so many great games this month, it will be difficult to make up my mind on which one to play.