Microgaming Rushes into 2022 with New Exclusive Content and Partner Releases! 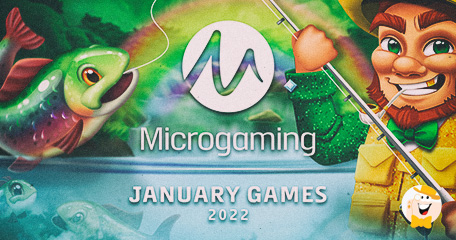 After giving us festive gaming treats last December, the oldest and most recognized game supplier from the Isle of Man, Microgaming, is ready to kick off 2022 in style with a great number of new exclusive and partner releases.

This is the first news from the privately held gambling software company after entering Buenos Aires city and province on 20 December, so let’s see what’s behind the curtain all throughout January!

The month of January starts with the next great showdown in the style of Old West. On 5 January, one of the company’s best partner studios, Just For The Win, is bringing The Bandit and the Baron, a typical western story set in the American Frontier.

Backed with expanding wilds, second chance respins and a Bandit Bonus, this saloon slot is also giving players a chance to win up to 25,000x their wager. Aside from the initial three spins during bonus, the counter can reset when cash symbols, or bandit symbols appear on the grid, simultaneously increasing the multiplier and unlocking positions to reap the rewards!

Coming up next is Gong Gaming with its next charging release, Buffalo Ways. It is going live on 6 January and it has the power to trigger up to 100 free spins in a single round! This title comes with 4,096 ways to win, crisp graphics depicting magnificent North American fauna, including a thrilling soundtrack for authentic experience as mighty beasts hurdle towards victory.

The third week of January begins with shiny watches, sparkling rings, gold bars and stacks of cash. These luxuries await within the vault of an entirely new slot from SpinPlay Games, called Bank Vault. Its launch is scheduled for 11 January, so if you’re into chasing Diamond Dollars instant cash prizes or triggering free spins alongside the studio’s action-packed Cash Catch feature, keep an eye on this vault!

The doctor’s loot lab even contains a secret invention, the Shock Meter, which is powered by wild symbols collected from winning combinations and its multiplier value increases with each new wild!

Agent Jane is Back!

Almost three years after achieving success with the second installment in its highly engaging spy series, Stormcraft Studios is ready to invite players on another top-secret assignment with Agent Jane Blonde Max Volume. The story continues on 18 January and features free spins with retriggers, an increasing multiplier trail and jackpot prizes, including big win potential.

Meanwhile, Switch Studios decided to reimagine baccarat for football fans and launch Match Day on 20 January. According to the supplier, it balances fresh energy and game-day style with the classic table game we all love so much. Players accustomed to stylish athletic aesthetic, bright energetic colors and animations will enjoy Match Day with every new hand!

Venturing out with Gameburger Studios this time continues with Lucky Lad Flynn in Fishin’ Pots of Gold. Available from 25 January, the next title in the provider’s rapidly expanding library is bringing more cash awards, free spins and Pots of Gold jackpots.

The game’s charming leprechaun, Flynn, delivers instant cash prizes and can also catch any of the four pots of gold symbols for static jackpots of up to 5,000x bet.

At long last, Northern Lights Gaming will present 5 Star Knockout on 27 January, a retro-themed knockout slot game. It is packed with innovative features for an exciting game play where filling one or more Star Meters activates free spins and gives players the chance to knock additional symbols out for even bigger prizes.

The company’s content partners are also kicking off 2022 with new slot titles, such as Hacksaw Gaming’s King Carrot and Book of Poseidon from Booming Games, joining the roster on January 6th and 20th.

“Microgaming rings in the new year with a host of fresh releases”, microgaming.co.uk, January 4th, 2022.

They never get tired, it seems as if they have been working hard for holidays to welcome us with attractive titles preparing us for amazing new year. I indeed admire their great work and long-term uniqueness.

My attention is on Agent Jane Blonde Max Volume, I really believe this is going to be great.

A great start to the year for Microgaming. It looks like this year will be interesting for players who love their games, a lot of new games already in January

I'm really looking forward to seeing what these guys have in store for us next.

I'm excited about the upcoming releases. Fishin' Pots Of Gold has piqued my interest!

Just when you thought they couldn’t get more repetitive… a veeery nice collection of games to start the year, I have to admit. Personal favorite is definitely Dr. Wildshock and Agent Jane of course!