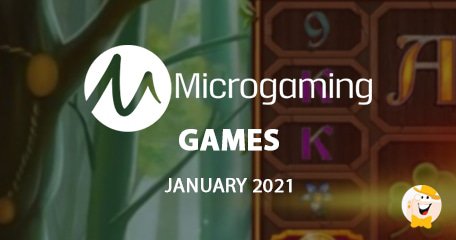 Leading online gaming software provider Microgaming has unveiled their list of January slot releases which will feature a host of characters such as giant gorillas, leprechaun detectives and bounty hunters.

To kick off 2021 in style, the developer and their extensive network of exclusive studios that deliver content to them have plotted a line-up of games that will make for an amazing January.

…which is developed by All41 Studios. The game, released on January 5th, is a highly volatile 6-reeler whose high payout rate will be the first of the two exclusive All41-supplied games this month that will feature Big Time Gaming’s Megaways mechanics.

In this game, whenever a specific combo of Scatters and symbols happen in the base game, a Magic Forest resin gets awarded. It provides a guaranteed number of Megaways games based on the trigger.

Once the three Scatters land with Shamrock Holmes and pixie symbols appearing in the top row, the Magic Forest Respin starts and unleash at least 117,649 paylines. One of this game’s features is Rolling Reels.

For a Fistfull of Dollars

Another game that already went live, on January 7th, is The Bounty by Snowborn Games.

The Wild West-themed game is based on Spaghetti Western movies and the reels feature the mugshots of famous bandits. The nameless bounty hunter needs to track them down and collect six identical Wanted posters to win the jackpot.

If a player lands three Ambush bonus symbols, they will trigger the extra spins feature in which players collect unlimited extra spins and multipliers.

The first in the line of games that are due to be released is Foxport by Foxium, scheduled for January 12th…

…and it will feature only three reels and one active Pauline. The ox Wheel is the centerpiece of the game and works as three bonus wheels in one. The Money Award, the multiplier and the resin mode, each with a different trigger. There are three possible jackpot awards: Mini, Midi and FoxPot.

This game also introduces another new feature, the Golden Sequence. During this sequence of between 10 and 20 spins, horses will stop on reels and highlight them. On the final Golden Spin, all highlighted reels will change to higher-paying gold symbols or gold wild symbols.

The Rest of the Program

January 26th will see the release of Forgotten Island Megaways by All41 Studios that is packed with features such as extra reels, Rolling Reels and King Spin.

“Microgaming rings in the new year with a host of exclusive releases” Microgaming PR January 7th, 2020.

“games that will make for an amazing January”

I can't wait to try them out! Great gifts for the beginning of this year :) Have fun!

They have a few interesting upcoming titles but I have to admit that none of them make me intrigued or curious to try with real money. Maybe when they are released I may change my mind but I am still waiting for the "wow" factor game from Microgaming.

That is a nice selection of games that are being offered by Microgaming. However, I am not very fond of Pachinko, I try it two or three times and bleed me dry. Golden Stallion Ultraways is pretty good I like the stampeding horses. Worth giving it a try.