Microgaming Sleighs in with Festive Gaming Treats for December 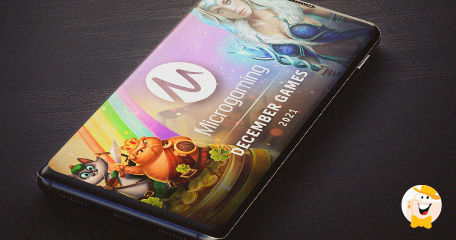 Microgaming is back this month after a shocking news early in November confirming the acquisition of Quickfire and its progressive jackpot network by Games Global.

The privately held gambling software company will still wrap up the year with the latest collection of festive slots and special holiday treats, designed for players to enjoy the winter season.

After a sparkling host of exclusive studio and partner releases last month, the Isle of Man based developer sets the seal on 2021 with a range of new gaming greats, provided by a growing list of content partners like SpinPlay, Snowborn and Gong Gaming Technologies.

Starting with Snowborn Games, we head to the Highlands this time to meet four cat clans battling their way to victory in action-packed slot Cat Clans. Going live on 9 December, this feline-friendly 20-payline title will give players the chance to join Clan Mac Cattus and combine great multiplier wilds in Cat-A-Pult free spins with sticky wilds, ultimately leading up to 20,000x wins.

Already released on 7 December is Amazing Link Riches from SpinPlay Games with free spins, a pick feature, multiple cash prizes and the provider’s popular mechanic for uncovering pots of gold. It is triggered when six or more Amazing symbols land in the form of the lucky four leaf clover, allowing players to land more of these symbols during the feature and increase the winning tally up to 5,000x their bet.

Adding a chill to this year’s last rollout from Microgaming is Arctic Enchantress, scheduled for launch on 14 December in collaboration with Neon Valley Studios. The game is packed withLink&Win mechanic, free spins, portrait wild symbols as well as 243 ways to win.

The studio’s latest wintry epic combines several enchanting features like nudging wilds and the new Column Boost feature to boost cash prizes and allow players to harness the power of the Win Booster.

As the month’s biggest highlight, Santa will be dropping off gifts long before the holidaysin Plenty of Presents, out on 1 December. Eager to start the festive season as soon as possible, Just For The Win this conjured up a cozy Christmas-filled slot with up to 30 free spins, multiplier wilds, and a 25,000x bet max win!

While making a break from winter-themed slots in the midst of December, players will have a chance to uncover mythic riches in Links of Ra. Launching on 15 December by Slingshot Studios this stunning slot is destined to reimagine the time of the gods Ra, Anubis, Sekhmet, Sobek and Khnum.

This visual work of art is based on the incredible Link&Win mechanic, including cash and jackpot prizes, as well as free spins and super stacked symbols of the gods.

Santa is Here to WinCrease the Excitement

The month of December starts with another snowy slot from Aurum Signature Studios, bringing the magic of the North Pole in Book of Mrs Claus. Its release is planned for 1 December, carrying delights with expanding symbols during free spins and a respin mode to complete more wins!

Already out on 6 December an epic showdown Empire Shields from Gong Gaming Technologies. The producer’s latest title is charged with Toppers above the reels that activate a double reel, expanding wilds, extra wilds and multipliers. On top of that, the feature shields on the Topper shift one space to the left on every spin to give players different ways to unlock the game’s full potential.

Among other titles to decorate the halls this December are also Fortune Rush on 2 December from Pulse 8 Studios, Crazy Tooth Studios’ Golden Hook on 8 December featuring the WiNCREASE mechanic, multiplier feature and the randomly triggered Golden Hook bonus.

Joining in during the holiday season is also a collection from Microgaming’s aggregation partners such as the cosmic classic Space Invaders from Inspired, a full throttle edition from MGA, called Fonsi Nieto, a new swashbuckling Pirate Pays Megaways from Big Time Gaming and two seasonal releases – Gamevy’s Christmas in Papertown on 14 December and Snow Scratcher on 1 December from Hacksaw Gaming.

“Microgaming wraps up 2021 with a range of gaming greats this December”, microgaming.co.uk, December 6th, 2021.

“the latest collection of festive slots and special holiday treats”

Still can’t get used to the fact that they’d sold all of their games and jackpots. Hoping that nothing will change for the players, a large percentage of slots from Microgaming makes up the best in the industry, after all.