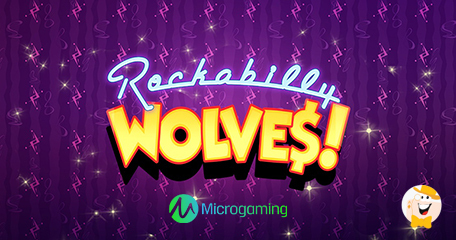 Video slot specialist, the legendary Microgaming, has pulled the wraps off their flagship spring 2019 release: Rockabilly Wolves, for which the creative team looked for inspiration in the lively age of rock'n'roll in the 1950s and the fashion trends that stemmed from it.

For the purpose of development of this game, they utilized services of Just For the Win – an independent studio which is one of many to have joined Microgaming under a joint roof late last year.

Time to Fire Up the Jukebox

Taking numerous visual and musical cues from one of the most beloved eras of recent human history (at least the one most people feel nostalgic for), Rockabilly Wolves, the five-reel, 20-payline slot, boasts a slick gameplay (“slicker than a well-combed pompadour,” as goes official press release's picturesque description)...

...and is masterfully enhanced with superior graphics and gritty rock riffs, as if just composed in the surf-rock band's rehearsal garage.

But what also makes an integral part of it are the neatly packaged special features that boost the gameplay with big win potential: stacked wilds, respins and bonus spins!

A Word or Two on Bonus Features

The base game is not devoid of high-paced action that pays well: stacked symbols will appear on each reel during it, while the wolves from the very title (“lupus in fabula” of sorts) appear as stacked wild symbols.

...and if you land two of them and eagerly await for the third one to trigger the bonus round, don't despair if that doesn't happen in the first go – because missing out on first chance triggers a RESPIN for a second chance of getting to that sweet bonus round of nine spins!

Bonus spins mode begins with a sticky wild on the third reel that awards a 2x multiplier. If you manage to land a multiplier sticky wild, this will increase the overall multiplier to a maximum of 6x.

Sticky wilds will raise the potential of a high-paying combination and by landing at least one of those or a multiplier sticky wild on each reel, three more extra spins may be awarded!

The energy never lets up in this fantastic title from Just For The Win, with a free spins feature loaded with rewarding sticky wilds and multipliers up to 6x. The free spins feature can be extremely lucrative, with players able to win up to 2,400x their stake on a single spin, and a retrigger is also available if players land a wild on every reel.”

“Offering a unique slice of 50s nostalgia, we are thrilled to welcome players into the fast-paced, guitar howlin’ world of Rockabilly Wolves. Players ready to rock ‘n’ roll the reels can expect an exciting blend of intense gameplay and cool sounds, with an array of wilds and sticky wilds driving the action throughout both the base game and in free spins.”

Rockabilly Wolves' official preview video can be seen just below! The game is live with operators using Microgaming's portfolio since April 24th.

“Rockabilly Wolves are off the leash in Microgaming's latest slot”, microgaming.co.uk, April 24, 2019.

Looks good, but those special features really are something.