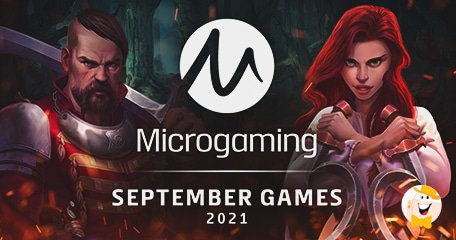 After a busy August, the Microgaming team continues to work hard. The brand is slowly stepping into the first days of autumn in style – full of surprises for players!

On the first day of the ninth month, Sparkling 777s dropped. 1x2 Gaming made this good, old classic casino-themed slot, and opened a season full of gaming joy!

Just a couple of days after, new markets welcomed the Queen of Alexandria from Neon Valley Studios. The ancient Egypt theme is always an attractive one for players, so this game will surely have lots of fans.

Furthermore, in the first phase of unveiling new content … the exclusive studio and content partner's game is dropping Cossacks: The Wild Hunt on September 7, a slot made by Foxium.

Three Cossacks are star in this title with cascading reels, giving you 46,656 chances to win, featuring free spins and WonderWays. Hunt wild, with the help of "Release the Wilds" and "To Arms," features that can help you in creating win combinations.

Two days later, on September 9, God of Fire is coming to deliver up to 60 million ways to win! The Northern Lights Gaming video slot features the Ultraways mechanic with win potential over 18,000x. The game includes unlimited free spins with lives, as well as Super Free Spins, where bonuses are awarded on every spin! Sounds pretty exciting!

Just For the Win is unchaining a hit title that will glue you to your gaming chair- Big Boom Riches is coming on September 14, and it will enable you some first-class fun. Cash prizes, delightful characters, and free spins…

Multipliers, Megaways, extra spins… it's going to be a thrilling ride, followed by the rhythm of classic blues. Buck Stakes Entertainment is hitting the scene with a shiny new slot titled, 4 Diamond Blues.

In the Second Half of September…

Players will take a walk down memory lane, back to the famous Jurassic Park. Raptor Riches is the newest sequel of the popular franchise and it's going to rock the iGaming scene on the 22nd. Made by Fortune Factory Studios, it features lots of game boosters, delivered solely for your entertainment. Multiplier and jackpots are available!

Miraculous Mega Moolah progressive slot is coming to deliver us some practical gaming magic. Aurum Signature Studios stands behind this release which is planned for release at the end of September. The provider promises many features, and tons of chances to win.

Another developer, Spin Play, found inspiration in the widely popular Lewis Carroll's book, Alice in Wonderland. 40 paylines and many features… the Alice in WildLand slot is going to take us all the way down to the rabbit hole! Prepare for the journey; it starts on September 28.

The poker portfolio at Microgaming is expanding on 23rd September. Hold'em Sit & Go, featuring a Wild West theme, is the newest addition to its offer.

A few days before this table game release, Gong Gaming Technologies is representing the Irish with Lucky O Mega, followed by Old Skool Studios and its newest title Ascension: Rise to Riches.

Search for the treasured stones is starting on the 15th of September, considering that Iron Dog Studios are taking us onto a quest for Dwarven Gems Megaways.

On the same day, Golden Rock will reveal the Book of Heroes.

Realistic Games will also launch the Mice N Easy, which will be available to play through the Microgaming platform, as well. Players, buckle up; this is going to be a very thrilling part of the year!

"Microgaming lights up September with a host of rich new content", microgaming.co.uk, September 7, 2021.

“a season full of gaming joy”

Cossacks: The Wild Hunt, I've been waiting for a long time for this one, finally! :)

They did a great job for their players, this is going to be a very exciting September for everybody.

Microgaming continues with surprises, they have invested a lot of work. Great job indeed!

So excited, can wait for Alice in WildLand to be released!