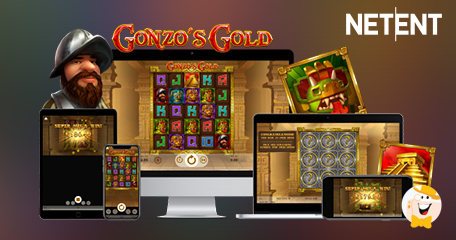 Another industry-defining character has made a comeback this year, as NetEnt released a brand-new title featuring Gonzo on 14 October, whose latest mission is to decode the mysteries of an Incan temple and accumulate wins up to 6,500x.

The next sequel in the series is called Gonzo’s Gold, and it’s a 5-reel, 5-row slot, featuring the popular cluster pays mechanic, high volatility and an RTP of 96.11 percent.

A Twist in the Franchise

Gonzo’s road to fame began a decade ago when the company introduced a groundbreaking title for that time – Gonzo’s Quest. The game has continued to astonish players all over the world since 2011, making NetEnt eager to continue the franchise in the following years.

The series saw much success with Red Tiger’s release of Gonzo’s Quest Megaways in 2020, which was later crowned by Evolution’s flagship title Gonzo’s Treasure Hunt, taking the highly successful AR-driven lineup to a whole new level.

To hit one of the greatest attractions in Gonzo’s Gold, you must align three or more scatter symbols – they are represented as golden pyramids. This combination will bring you 10 free spins plus a bonus win.

Before you start the free spins round, a pick-and-click game will transform one icon into the main feature of this game – the expanding symbol. However, landing two or more expanding symbols will cause them to expand and cover an entire reel or row, triggering additional wins for the player.

According to Todd Haushalter, chief product officer at Evolution, the team behind Gonzo’s Gold has come up with a bit of a twist this time.

Apart from the features that players can usually expect from one of the games in the series, this title is capable of replacing the bet lines and transforming them into a cluster pays slot with a free spin expanding symbol feature.

“We’re always looking to challenge what people expect from a gambling experience, and this is an exciting new take on Gonzo. Both new players and those familiar with Gonzo are going to thoroughly enjoy this next stage in the journey,”

Go here if you want to take a look at the official trailer.

Among the latest two masterpieces from NetEnt are also Gordon Ramsay Hell’s Kitchen and Starburst XXXtreme, a game based on the international reality TV show featuring the celebrated chef, as well as the long-anticipated, super-charged sequel to an all-time classic.

With the latest follow up to the provider’s immensely successful series, the magic of Gonzo will offer even more new twists and turns, taking the adventure to greater heights.

In conclusion, since each game in the franchise is adored by players worldwide, NetEnt didn’t change the essence of what it makes so great. However, Gonzo’s Gold is bringing the new mechanics along, making everyone’s visit to El Dorado a trip to remember!

“The next sequel in the series is called Gonzo’s Gold”

Gonzo’s is back! I already tried it, and I must say I loved it :)

I was waiting for this for months, can’t miss one more title with Gonzo!!!!