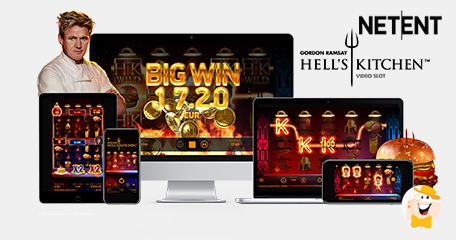 Ramsay is a famous owner of restaurants across the globe, earning 16 Michelin stars for excellent results. He became the leader in the culinary industry not only in the United Kingdom but also across the world thanks to the Hell’s Kitchen™ reality TV program. The new NetEnt slot is based on the same show while including 5 reels and 3 rows.

The Gordon Ramsay’s show will continue to engage people around the world, with the new 20th season announced for the upcoming months on FOX in the US.

More About the New Game

The brand-new slot from the Swedish company will showcase the full culinary atmosphere and excitement thanks to the inclusion of excellent features such as knives, pots, and plates as part of Ramsay’s Wilds feature. As part of the experience, players will see up to 7 wilds in the base game, which will be followed by scatter symbols.

If you activate at least three scatters (appearing as Ramsay’s glaring stares), you will also activate Team Challenge Casino Spins. Following the gameplay, customers will get two play areas featuring a classic Hell’s Kitchen allowing them to engage in the competition between the red and the blue squads. Each player should pick a side, and if their team wins, they will enter Gordon’s Bonus Game. As part of this feature, players will enjoy multipliers and random prizes of up to five times the wager hidden behind the Gordon Ramsay Hell’s Kitchen™ menus.

“This is a genuinely fun game that is rich with bonus features that are not found in any other slot. We pride ourselves on bringing new playing mechanics to the industry. The team did an amazing job with this game and they did a brilliant job capturing the essence of Chef Ramsay and Hell’s Kitchen. I am sure players are going to love it.”

“NetEnt’s reputation as a leader in creating branded entertainment products was a determining factor in working with them for the Gordon Ramsay Hell’s Kitchen™ video slot. We are proud of the game and are sure fans of the show will love it.”

As marketing goes it appears that Ramsey is popular, however, this game is for me a no thanks. Gordon Ramsey has never appealed to me. I found his Hell's Kitchen and some of his other shows to be vehicles for the chef's arrogance and sadism masquerading as virtue. Gordon Ramsey is therefore a huge turnoff for me, so playing...

As marketing goes it appears that Ramsey is popular, however, this game is for me a no thanks. Gordon Ramsey has never appealed to me. I found his Hell's Kitchen and some of his other shows to be vehicles for the chef's arrogance and sadism masquerading as virtue. Gordon Ramsey is therefore a huge turnoff for me, so playing a slot with his face and name on it is a no go. Sorry Gordon fans but that is my opinion.

Gordon Ramsey is famous all over the world. This idea is very original and I believe this game will be very popular! I really like Team Challenge Free Spins feature! Sounds great! This game is an interesting fresh addition to their portfolio!

I watched that Hell’s Kitchen ™ reality show, it was very interesting, I hope the slot will be just as interesting for the players

This slot will be an excellent addition for all slot lovers…