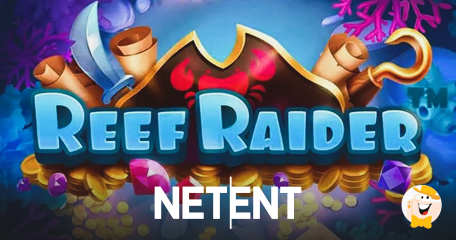 Set to release on August 12th, Reef Raider is an online slot aiming to appeal to both pirate-themed title fans and to those who are just looking for a feature-filled game!

This 7-reel game was developed by a leading distributor of digital gaming systems from Sweden, NetEnt, and takes punters beneath the waves within a shallow rock pool!

Here is where a rum-colored crustacean dwells, so take a dip and try to get your hands on the hidden treasures!

Meet the Toughest Pirate of Them All!

Long John Scissorhand should be feared as he is different from the others! With one scissorhand and one hook, he is a genuine threat to his enemies. Yes, he sees half the world with one eye covered like a true pirate, but be assured, he sees you! However, he might also help you find some treasures.

On the reels, you see a mix of colorful gems and some tiny innocent yet important sea treasures. Different shells and gems appear on the reels in groups and are grouped by the Cluster Pays system!

A 7×7 cluster pays mechanic in combination with the famous Avalanche feature is exactly what makes this an appealing pirate-styled adventure!

At least 15 Treasure Trail meter bars filled take you into Free Spins, and then, along the way, players have a chance to activate extra slot features.

Get your winnings boosted by some Multiplier Symbols landing horizontally or vertically adjacent to a winning cluster that will multiply that win by its value: x2, x3, x5, or x50.

Anchor Drop feature activated by 3 charged bars when up to 3 different low-value symbols will be chosen at random, and all of the matching symbols will be removed from the grid.

As if this wasn't pretty great already...

...this popular provider of online casino content has included even more bonuses to maximize payouts and user anticipation, such as Random Wilds Feature awarding up to 8 Wild Spin symbols on random places, or a Mystery Chest Feature activated by 9 charged bars and replacing 2 to 16 medium and low win symbols with Mystery symbols.

The Mystery Overlay feature is automatically activated once you enter the Free Spins feature, while you will get additional spins for every 3 charged bars!

A Word About the Developer

As one of the leading software brands in the gaming industry, NetEnt is a multi-award-winning company with headquarters that can be found in Stockholm, Sweden, as well as in other locations like Ukraine, Malta, and Gibraltar with over 700 employees.

Established in 1996, NetEnt established its very first mobile game in 2011. In 2013 it published a live casino, while in 2014, 21.4 billion in transactions were made, and in 2015, the supplier entered the US market. Nowadays, its products are available in over 300 online casinos all across the globe.

“Long John Scissorhand should be feared as he is different from the others!”

This game offers a bunch of features and cluster pays mechanics so, I definitely have to try it.

Wow, sounds like this slot is a true iGaming blast! From wild symbols to free spins...

The background is very eye-catching, and the Pirate Crab is so cute. I hope he will bring me luck :)

What’s not to like! Colors, theme, and a bunch of features! Love it!