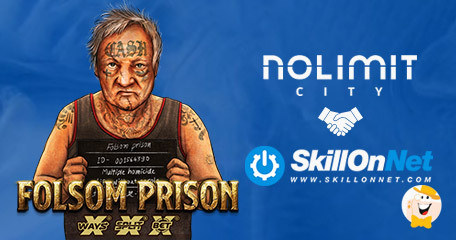 Exactly one year and a half after introducing its high-octane, unforgiving, and relentless slot game from 2021, San Quentin xWays, the international team of experienced and highly talented iGaming artists, Nolimit City, is making a tribute to another state jailhouse and releases Folsom Prison!

You may remember the name from younger days as it also represents the first live album by American singer-songwriter Johnny Cash, released on Columbia Records on May 6, 1968. However, this is no singing matter, especially if you went through the horror of dealing with Karen in the studio’s latest release.

As 2022 marches on, Nolimit City continues to astonish the global iGaming community once again as they’re back with another relentless tribute to state prisons.

After making a hit title in January 2021 about one of the oldest prisons in California, the Swedish studio is set to visit another slammer with even more ruthless and infamous inmates – Folsom Prison.

If you’re still feeling nostalgic about playing San Quentin, get ready for a throwback and see what life at Folsom Prison is really like. As you start to discover the studio’s latest slot game, it may occur to you pretty soon that the only way to stay alive in this joint is to grow a pair of eyes at the back of your head and also forget that sleep ever existed…

According to Nolimit City, Folsom Prison comes with a deep atmospheric setting that brings the horror of gruelling life sentences carried out over the decades… during base play, there is an eerie soundtrack in the background too, making sure that players’ heart rates are at the maximum!

As you may have presumed, The Chair is the brutal end game level, while doing your time in the filthy, cockroach-infested prison cell is just an introduction to “the end of the world”, as inmates call it.

With its intense reel setup of 4-6-6-6-4 rows, Folsom Prison will bring hours of action on any device, especially when several locked positions get opened on good behavior. What happens next is that the cockroaches spawn in the open positions on the 3 middle reels and bring more anticipation for the player!

Next, it’s all about the Toast Bet, which guarantees a new round of scatters, but at the cost of an extra 20%. Amongst other things, there are also wild symbols, xSplit and xWays, as these mechanics are the only way to make your sentence bearable…

Folsom Prison has a total maximum payout cap of 75,000x only getting there means that you Meet Your Maker, so be at your best behavior!

“A Prison that's become immortal by one of the best albums of all time, was a big inspiration for this title,” explained Per Lindheimer, product owner at Nolimit City.

Available on all partners casinos from June 14th, 2022, Folsom Prison will make your adrenaline levels so high, that you may forget how you even got there!

SkillOnNet and Nolimit City Teaming up

Among the studio’s latest partnerships on sight in June is the one with SkillOnNet, whose network now encompasses several favorite online casino sites like PlayOJO, Mega Casino, Metal Casino, SpinGenie and others.

The integration will allow players on these iGaming platforms to access the provider’s full suite of slots including chart-topping titles like Mental, San Quentin xWays and Tombstone R.I.P.

I'm confident that they are a market leader. Very inventive team, they push their bounds with each new game, and I can't wait to see what's next.

This is exactly a situation when you can say that every next game is better than the previous one. NLC rocks and if they continue in this tempo, they might become one of the leading providers on the market!