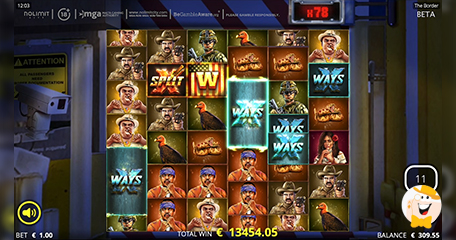 After building its portfolio with ‘kickass game mechanics’, the recently purchased slots development studio, Nolimit City is back with a new groundbreaking feature.

To further improve and intensify the action in its sought-after slot machines, the company has built up a number of exciting and game mechanics over the years.

This time, a brand-new volatile and extremely engaging game mechanic that will become part of the growing Nolimit xMechanic Family is called, xCluster. Let’s see what its superpowers are all about.

The best way to present a new mechanic or feature is to announce it with the upcoming slot. Long story short, xCluster will debut in Nolimit City’s upcoming cluster game, called The Border.

As described, the latest action-packed feature will surely spice up the studio’s well-known bonus modes. It works quite simple, though – you need 2 or more unique symbol clusters in the same avalanche to trigger xCluster.

As a result, this setup increases the win multiplier by +1 for each unique symbol cluster. However, it all begins from the second cluster onwards to make things a bit more challenging.

Meanwhile, if you enter the super mode with extra spins, also known as Coyote Spins, the multiplier will stack and even take you to heart-pounding wins. The best thing about the upcoming xCluster multiplier is that it’s instantly added to gameplay, affecting all current wins of each spin.

“We’re known to push the boundaries of what’s thought to be possible,” claims the studio.

The entire team is proud of xCluster and it hopes that the next tool in Nolimit City’s arsenal will appeal to many players around the world. No doubt it will propel the studio to the forefront of innovation in regard to online slots within the next couple of months.

The Border will go live globally with partner casinos on the 13th of September.

At the beginning of August, Nolimit City started a nostalgic stroll down memory lane, called Old but Gold.

It shines a light onto some of the oldest games in the catalog, such as Tombstone, a western-themed action slot that will take you onto the porch of a typical Old West saloon. This is the first game to have Easter eggs, the gunshots, including a spaghetti western-inspired instrumental playing in the background.

Tombstone is an outstanding slot from with a huge potential to kick off a whopping 300,000x maximum win, so have a go and enjoy it!

This month, the recently purchased software supplier by Evolution is looking back at the Kitchen Drama series, a perfect game for everyone’s appetite.

Kitchen Drama Sushi Mania and BBQ Frenzy were released in 2017. These two releases marked the start of getting familiar with complexities in slots, said Per Lindheimer, the CEO.

Check them out and come back to tell us about your experience in the comments!

Their arsenal of features is so unique and unlike anything else in the whole industry. Evolution made a great move!