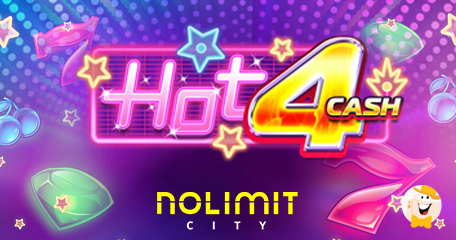 Pushing boundaries with an entirely new game concept, Malta-based content supplier, Nolimit City announced their first dual release within the same month. Following the success of Thor: Hammer Time, the studio introduces us to Hot4Cash, which represents the provider’s “most bold game statement to date.”

Hosting as little as 3 symbols with 3 color variants of each along with 3 main features, this release offers extremely simplistic but intriguing gameplay. Being one of the “stand-out games for its unique approach,” it is available on all the studio’s partners as of August 14th 2019.

The Beat Goes On and On

…greet the players with the 2-3-3-3-2 reel construction, along with plentiful features, among which:

Per Lindheimer, Product Owner at Nolimit City, commented on the newest creation as follows:

“Hot4Cash is a game built solely around the features and its innovative trigger feature, highlighted within the 4 Hot Zones which are constantly present. With an exciting individual reel stop and high paced vibe, this machine will make your heart and booty bounce to the beat!”

Recent Additions to the Portfolio

The beginning of the month brought a Viking-themed release, Thor: Hammer Time. The title is placed in a 5x3 grid, with 20 lines for potential winning combinations.

Another adventure brought the magnificent aesthetics of the legendary lost Mayan civilization. Mayan Magic Wildfire comes in a 3x3 diagram with 10 fixed lines which pay both ways. As expected, the appropriate collection of features gives the final touch to the story.

…the developer entered an agreement with Betclic, leading Bordeaux sportsbook and casino provider. Under the terms of the agreement, the distributor will have access to the studio’s entire suite of releases and will be able to offer it to all the consumers.

Another prolific partnership was inked with Rootz-powered platform – Wildz, allowing them to treat their members with top-quality content from Nolimit City.

Rootz Ltd. has established itself as a must-have across the entire industry. The main focus is on automatization, machine learning, and appealing gaming experience. Due to this complexity and diversity, it draws the attention of not only players but also affiliate partners who are interested in progressive solutions.

“the studio introduces us to Hot4Cash”

Great game! Love the neon colors, and the design of the game. The music is good but for me sometimes I turn it off as it can be a bit much. I had a good win on one of the bonus rounds, was quite a surprise. I love games like this it is what makes playing slots so much fun, such an exciting game, THANK YOU!

There’s an excellent example of how to make a maximum fun with minimal elements!