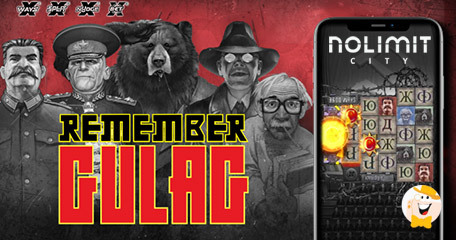 The Studio is Back with a Forgotten Chapter of Post World War 2 Era That Will Chill Your Bones!

Weeks after making a splash with Punk Toilet and Misery Mining, Nolimit City decides to make a sudden turn in game development and reimagine the past by sending us to the post WW2 era in a new hit title this month, called Remember Gulag!

Only a month apart from securing its Ontario license along with a host of other internationally acclaimed software studios, the Malta-based provider is ready to once again hit the dirty trenches and continue its impressive line-up of realistic historical slots – only this one will make you feel the misery of the entire previous century.

While making waves at this year’s ICE London conference is something we’re used to seeing from Nolimit City, taking a thought-provoking approach to slot development is quite a surprise!

The studio has taken a much more serious stance in Remember Gulag by bringing to life a theme that has never been seen before in the entire industry. It revisits a long-forgotten chapter in history of the post WW2 era, when certain leaders took away everything from humanity and brought forward the Gulag.

Your goal is to escape from commanders, spies, scientists and oligarchs on a 3-3-4-4-5-5 setup where reels 5 and 6 are locked up during base play. Stealth is of utmost importance in Remember Gulag, especially when the Propaganda Bet is on the line.

For extra excitement and those engaging adrenaline moments, Nolimit City included features like xNudge Wild and xWays which come in quite handy when sneaking and trying to complete the mission.

If you are patient enough, the game will launch Gulag Spins, which ultimately take you to the Oligarch Status! You should be able to trigger a total maximum payout of 30,000x in this mode, but that’s not a win to celebrate or make public under these circumstances, anyway.

Per Lindheimer, product owner at Nolimit City said that Remember Gulag can't change the course of history, but in some way, it can make a difference for all the victims of the regime.

This slot will be available on all Nolimit City partners from April 19th, 2022.

Last month, the Malta-based software provider has also continued to grow its footprint in the industry by launching in Ontario, Canada.

The company was licensed by the Alcohol and Gaming Commission of Ontario (AGCO) after extensive eligibility assessments, giving Nolimit City the right to roll out their revolutionary games in a province of around 15 million residents on the 4th of April.

This license is an important milestone achievement for the studio, as it amplifies Nolimit City’s long-term growth opportunities globally. Ontarians now have access to the company’s expanding and groundbreaking list of games with innovative xMechanics, such as Mental, East Coast vs West Coast, Tombstone RIP, and many more.

The latest addition, Remember Gulag, will also be available at all partner casinos right upon launch!

It's been the same for them every time. Incredible visuals, a fascinating story, and even more impressive features.

Woh, never seen something like this before! These guys are rockin’!