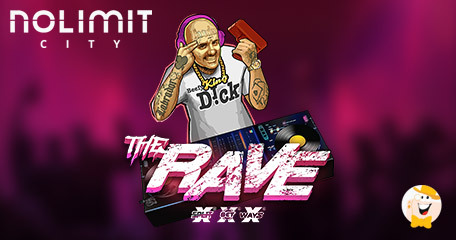 Get Ready for the Wildest Summer Rave Party!

After making much stir last month with its latest jail themed release, Folsom Prison, Nolimit City is back to snap glowsticks, put on the brightest outfits and get the party started.

With Summer already here, it’s time to let loose and go all-out, so if you’re down for partying, tune in for the studio’s brand new release – THE RAVE.

As Nolimit City returns this July to honor the revolutionary music movement from the late 1980s and early 1990s, you will soon find yourself transported into a frantic underground den, a typical place where rave parties used to take place.

The Rave features Joe Labrador, also known as DJ P5ychØ Manhunt as the headlining act. All you need to do upon joining is glow up and let the music take you up to heaven, although, there is something to keep an eye on – your water, because it might turn into wine, says the studio.

As expected, the provider’s next adrenaline-pumped slot doesn’t hold back on visuals and animations. It brings a lot of action in a typical rave fashion, meaning you’ll see a host of mental rave goers, lasers, smoke machines, and hear some of the filthiest beats in town!

Of course, as the big wins start piling up, the beats may progressively get heavier, so you can have a guaranteed night out to remember!

The Rave is played on a 5 reel, 3 row setup but you can make wins in 243 ways. However, the ways can explode into the thousands possible combinations thanks to the provider’s well-optimized mechanics. If you by any chance manage to land 3 or 4 ‘Drop the Bass’ scatter symbols, you will be blasted to the ‘Murder on the Dancefloor’ feature.

However, landing 5 of these special symbols will take you even further – on a spiritual journey with the ‘God is a DJ’ feature. During these rave-like highlights, you will enjoy three impressive mechanics that will spice up the night… for example, Mashup! turns all character symbols into the highest paying symbol, while Crossfader turns all low-paying symbols into wilds.

Lastly, Sidechain links 2-5 reels and if you’re really into partying, don’t forget to double the dose with the provider’s Double xSplit Wilds as well as xWays and xBet. The highest wins in The Rave can go as high as 41,500x the bet – a real treat after hours of dancing and having fun with your favorite beats!

“Welcome to the party that never ends with endless light shows filling the scene and unprecedented possibilities,” said Per Lindheimer about the studio’s latest game, product owner at Nolimit City.

He invited players to feel the groove and immerse themselves into the music with in-house tracks that will bring out their young rebellious side. The Rave is already available at all Nolimit City partner casinos from July 12th, 2022.

A quick reminder that Evolution AB published an agreement to acquire the entire share capital of Nolimit City Holding Ltd back in June for EUR 200 million. The entire transaction could amount to up toEUR 340 million due to the earn-outs of up to EUR 140 million.

Among the studio’s latest partnerships are the one with PokerStars and SkillOnNet. Earlier in May, the international studio announced an exciting partnership with Belgian power house, Gaming1.

“Nolimit City gets the party started with The Rave release”, nolimitcity.com, July 12th, 2022.

Music is awesome, especially when you get some winnings :)

Let's get the party started with another creative release from Nolimit city!

I listened to the slot music and I must say I liked it, a big change from the music we hear all the time when it comes to slots.

I can't wait to hear the Free Spins music! It sounds like it could be right up my neighbourhood. :)

They keep getting better and better with every new slot! This is amazing and beyond words!!