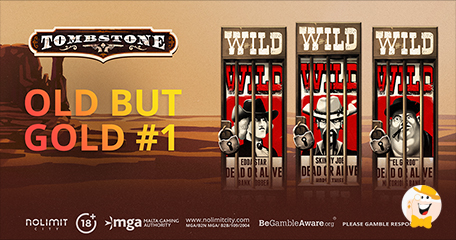 Nolimit City, an expert provider of online slots, invites players to join the action on the popular Old but Gold series of games, where the company puts some light on the older games from its portfolio.

The latest experience from the company is Tombstone, a western-inspired game taking users to the saloon with spaghetti and music in the background. As you play this unforgettable experience, you will see reels covered with A to J royals as well as with other symbols such as guns, horseshoes, money, gold bars, and dynamite elements. This makes it a perfect fit for Wild West enthusiasts.

Tombstone is the original game from the provider where it introduced a high volatility level.

What Was Stated on the New Release

Nolimit City is determined to enrich its presence in the market and supply players with the best games in class.

"Tombstone is my all-time favorite production. We were so psyched to get going! We started straight off another project - literally, the day after we finished Hot Nudge - as we had [Tombstone’s] math previously but chickened out as it was so volatile. Hot Nudge and Tombstone’s FS are actually siblings!"

On the other hand, Waillon Le (Wai), Mathematical Game Designer at the company, says that Tombstone is the second game with the feature xNudge® but also a volatile experience. In Hot Nudge, they took down the volatility level by adding a lines game rather than a sticky multiplier.

According to his words, the new game stands out with many firsts – this is the main title to have a bonus spins mode Bounty Spins, which comes with sticky wilds providing enormous win potential.

If you want to embark on this exciting journey, you should check the following features of the game:

The game will be a powerful addition from Nolimit City. Its design is unique, and players will enjoy everlasting action in this game.