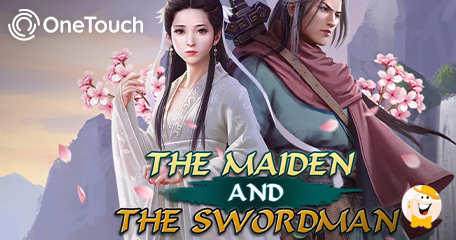 Having secured a milestone deal with Relax Gaming on 1 April, the mobile-first supplier OneTouch has entered into a partnership with Big Wave Gaming to deliver an Asian medieval slot with potential for huge wins, called The Maiden & The Swordsman.

According to the first impressions, this project delivers a stunningly designed, graphically rich story that will put players in hero mode on an epic quest to finding their true love.

A Waterfall of Wilds and Nudges

Setting off on a medieval Japanese quest starts with a five-reel, three-row, 50-line grid, where the main Swordman character battles various elements to reach his beloved Maiden and uncover humongous wins along the way. As part of the journey, a treasure trove of bonus features will kick in to help him reach up to 4,000x total bet.

Revealing three or more scatters on this quest will reward each enthusiast with an unlimited number of extra spins, including a combo of 10 complimentary rotations with a unique ‘nudge’ feature. If it occurs during this mode, wins could even turn into bigger prizes.

To improve their prosperity further and create more potential, customers will have to uncover the wild waterfall symbol which can take over the reel and lead to larger potential payouts. The Lovers Reunited feature is triggered after the end of extra spins if a wild appears on reel 5 more than twice. As specified, the lowest possible bet starts at $0.50 but the ratio expands up to $80 a spin.

In previous months, OneTouch has had a successful streak with Loot or Boot, Ganbaruto Battle and Flexing Dragons, which helped the provider increase its audience and promote new state of the art mobile-first slots.

However, the 2015 established development company also specializes in tables games and live casino products, whose popularity has gained quite a momentum in 2021.

Aside from signing several landmark commercial agreements and partnerships with MarsBet, Slotegrator and QTech, including Relax Gaming this month, the provider has integrated its suite of games with other tier-one operators such as Bitcasino, EveryMatrix and 1XBet.

“The Maiden & The Swordman is a beautifully designed game and we’re delighted with the results of our partnership with BWG,” commented Petra Maria Poola, head of business development and operations at the studio.

She also said that players will likely revel in an epic journey across a mysterious land, where they can get a chance to build an adventurous story of two central characters and discover hidden features that lead to bountiful prizes along the way, potentially kicking off massive wins.

OneTouch is now famous for creating international hits with cross-cultural appeal, such as the latest title, The Maiden & The Swordsman or Queens of Glory. Meanwhile, the group also produces content for specific local audiences, including Ganbaruto Battle, which draws inspiration from the great Japanese tradition of sumo-wrestling.

Equally, the company develops classic casino themes with Ancient Egypt mythology and Vegas symbols, known for generating global popularity. For example, one of the most sought-after titles, Forgotten Pharaoh, has achieved incredible success on the market and drawn a whole new generation of players.

“OneTouch and BWG Launch Epic Quest for Lost Love in The Maiden & The Swordsman”, onetouch.io, April 19, 2021.

“OneTouch has entered into a partnership with Big Wave Gaming”

If searching for a heroic-themed slot with the story of true love, this one is promising. A refreshing release, at least for me :)

I'm not a huge fan of One Touch games, but maybe I'll like this collaboration.

The game is coming with a fantastic design and very nice features.

Nice lookin’ game, I might take it for a spin or two; don’t know much about this provider though, but I’ve played Loot or Boot, it works okay.

I can see that this slot is going to be very popular. One Touch and Big Wawe Gaming did a great job!