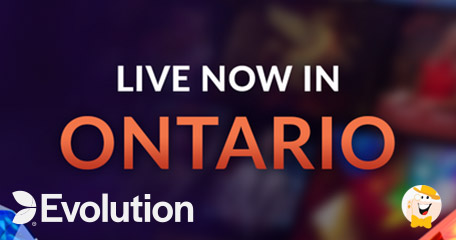 Evolution, a sophisticated provider of top-class live dealer games announced that it has gone live in the newly regulated online gaming market in the Canadian province of Ontario. As far as this gigantic corporation noted, the integration was done via Evolution’s One-Stop-Shop (OSS), a single, online integration process.

Having in mind that the creative supplier enters this region via multiple operators, its superb products and services will become available to a wide range of local players. Thanks to this milestone achievement, they will get a unique opportunity to immerse themselves not only in the studio’s most representative releases but in top-performing titles from their partners as well.

Ontario’s legal iGaming market started operating on Monday, April 4th As a small reminder, the process began in April 2019 when the province’s government unveiled plans to open up the market to private operators.

Evolution and the operators it cooperates with for this particular market are licensed to operate in the province by iGaming Ontario (iGO). This institution is the subsidiary of the Alcohol and Gaming Commission of Ontario (AGCO).

“This is another momentous launch for Evolution in Canada. We are excited that licensed operators in Ontario will have access to our live dealer studios in Europe and therefore to our full portfolio of live-streamed games. We are also confident that online players in Ontario will absolutely love the quality, variety, and innovation of the online games – both live and slots – on offer from our Group brands”.

… players from Ontario will get the chance to check out the full Evolution portfolio of online live casino games, and game shows, including the “First Person” 3D animated variants of some games. Those encompass Live Roulette, Blackjack, Baccarat, Poker, Craps, Lightning Roulette, Crazy Time, and many more.

Also, they will gain access to iconic titles from two renowned studios operating under this group. Punters will be able to immerse themselves in action-filled stories such as NetEnt’s Starburst and Divine Fortune and Red Tiger’s Cash Volt and Gonzo’s Quest™ Megaways™.

Evolution aside, a couple of other respected suppliers received certification to offer their products and services to customers residing in the newly-launched iGaming market.

…Nolimit City declared that it obtained the approval to showcase its games in Canada. Mental, East Coast vs West Coast, Tombstone RIP, and many more, are just some of the hits that will be offered to Canadians. Also, Play’n GO, Pariplay, Microgaming, Quickspin, and Relax Gaming are the studios welcomed to provide content in this region.

Although things seem to be running well so far, some experts have concerns that the official launch of the iGaming market could lead to increased problem gambling. As they add, lower tax rates mean the companies can invest more in advertising to attract a higher volume of visitors.

…the province claims that a legal alternative to the existing "grey market" of online gaming options is a way better solution. According to officials, the system is designed to ensure more responsible gaming, prevent underage access, and ensure compliance with applicable laws including anti-money laundering rules and regulations.

I have no doubt players will enjoy Evolution’s live games, they are simply breath-taking! Plus, they gain access to Red Tiger and NetEnt content, what’s not to like about it?