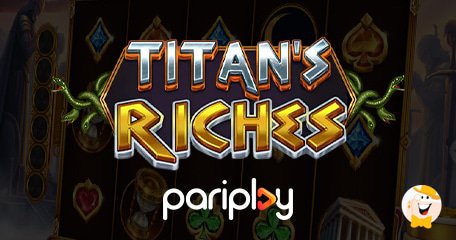 One of the leading online aggregators and content producers, Pariplay, announces the newest addition to its burgeoning portfolio. Structured as a 5x3 diagram, Titan’s Riches slot brings 20 paylines and an amazing assortment of features.

Aside from its own products, the creative team aggregates the abundance of other releases from some of the industry’s best-known studios on its Fusion™ platform. In addition to this, the company offers a variety of conversion, retention, and tool mechanics.

Taking punters to a sacred place where magnificent giants once ruled the world, Titan’s Riches slot is a place where humongous rewards reside.

“Titan’s Riches is a lavish, action-packed adventure that will appeal to treasure-seekers everywhere. With its sumptuous presentation and rich rewards, players can enjoy a heavenly experience should they manage to land an alluring prize within the Titan’s Riches feature.”

When a Wild icon lands on the reels and all wins for that round have been awarded, each Wild then drops down one position, awarding a respin. That is Descending Wild Respin, which is active until all Wild icons have left the reels and last respin have ended. Worth stressing out is that this feature is active both in the base game and bonus spins.

…when a Wild icon lands behind the Descending one, it initiates the WoW feature. This stands short for Wild on Wild, and when this mode is on, Wild spread to cover the entire reel. All wins are granted for that rotation and then the feature ends.

On top of that, there’s Titan’s Riches Feature, which is activated when 6 or more silver coins have been collected. Speaking of coins, there are two different sorts of it- silver and gold. When a player manages to collect a certain portion of those, one can score multipliers, extra spins, or some other surprises.

Would you like to catch a glimpse of the atmosphere from Pariplay’s Titan’s Riches? Take a look at the official trailer and share your impressions with us in the comments section below after you finish reading the article!

Welcoming New Members to the Board

A couple of days ago, the provider announced the newest reinforcement to its team, by hiring Jose Micallef as Business Development Director. His rich experience from NetEnt, where he had a similar role, as well as seven years at the B3W group, make Micallef an excellent addition to Pariplay’s board.

… the developer signed an agreement with Gamshy to add the game studio’s top-notch releases to the Fusion™ platform. Thanks to this cooperation, players gained the access to Jumping Sushi, Fruit Tribe, Inferno and Western Barn, and many other action-packed releases from the forward-thinking creator.

In February this year, the company announced a milestone deal with Rush Street Interactive, which enabled the expansion of the thriving market of the United States. The strategic contract was signed with PlaySugarHouse.com, a major player in New Jersey.

“Pariplay aims for the skies with Titan’s Riches”, pariplayltd.com, April 8, 2021.

“20 paylines and an amazing assortment of features”

Cool, the studio did a great job with all those features!