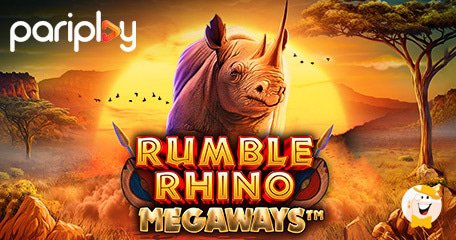 Famous Title Getting a Megaways Upgrade

After the announcement on September 22nd, when Pariplay claimed it was ready to enter the newly regulated iGaming market of Netherlands, there is a new title arriving to the platform, carrying huge win potential thanks to the popular Megaways mechanic.

The online gaming division of Aspire Global is launching its latest thrilling slot adventure called, Rumble Rhino Megaways, and it represents an action-packed savanna trek that offers exhilarating features and immense exposure on 86,436 ways to win. Want to hear more?

A Must-Have for Operators

Much like its predecessor, Rumble Rhino, the revamped version with Megaways is set in a sun-drenched African landscape, where players trek across the savanna in hunt for majestic animals and even bigger wins.

On their journey into the sunset, slot enthusiasts will also be surrounded by a beautiful backdrop and herds of wild animals, such as gorillas, cheetahs, zebras, gazelles, crown birds and meerkats.

The game’s reel layout is somewhat unusual and comes in an irregular 7×4 shape, where Mega symbols can cover up to 28 reel positions! This functionality puts players on the path to huge wins, while landing a Mystery Mask will launch a Rumbling Rhino stampede across the reels, flipping random symbols that convert into matching images for more winning combinations.

Nevertheless, the action doesn’t stop here, since bonus symbols landing on reels 1 and 6 award 12 complimentary spins. The best thing about this round is that it can be retriggered, allowing players to keep the action coming for the possibility to rack up truly rumbling prizes.

As you probably know, Rumble Rhino Megaways follows the studio’s latest additions to the captivating, thrilling and immersive portfolio, consisting of 120+ proprietary games with innovative and entertaining features, optimized for all demographics and preferences.

Among the recently launched games are King Koko’s Quest, Scrolls of Aphrodite, The Secret Order and Gold’s Guardian, while the Spirit of Mustang and Phoenix Kingdom continue to perform incredibly good across the entire sector.

“Rumble Rhino Megaways offers exciting and fun gameplay with immersive features that will have players truly entertained as they hunt for big wins,”

– commented Joey Hurtado, managing director of games at the studio.

He added that BTG’s game-changing Megaways mechanic is brought to perfection in the latest title, offering 86,436 ways to win. Hurtado emphasized the immense popularity of this technology whose reputation is growing around the globe, making the latest game a must have in all operator lobbies.

Among other things, Pariplay also aggregates thousands of games from some of the industry’s widely acclaimed studios. The company’s FusionTM platform is equipped with a range of conversion, retention and tool mechanics, and it is licensed in more than 16 regulated markets.

Earlier in September, Pariplay has united with two major players in the iGaming industry to fortify its position on the global marketplace. Following the partnership with Pragmatic Solutions on September 7th, which allowed the distributor of diverse engaging casino content to join an extensive operator network, Aspire Global’s software division teamed up with a multi-jurisdiction provider FansUnite Entertainment.

The deal will see Pariplay’s wide portfolio of proprietary and third-party content become available on FansUnite’s B2B Chameleon Platform, offered across the globe.

“a new title arriving to the platform”

Thanks LCB. Always priceless and valuable information with little work on the player!!

I have always liked Rhino-related games, I will definitely try this one, particularly because of 86,436 paylines :) Hope Mystery Mask feature will land for more winnings, good luck :)

Pariplay has so many amazing releases! This megaways version looks stunning. Let's try this out!

Pariplay is nailing it just like that. The revamped version of Rumble Rhino looks great, I’m sure it offers better playtime than the original.