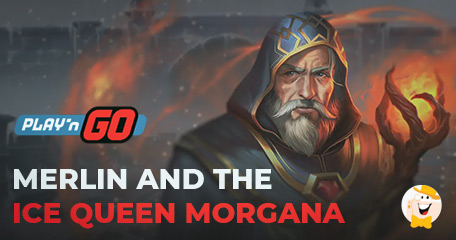 An Exciting Addition to Merlin-Inspired Series

Play’n GO, one of the most productive content suppliers is happy to present one more adventure added to its rapidly growing catalog of finest online slots. Organized as a 3x5 grid, Merlin and the Ice Queen Morgana is a powerful addition to the Merlin series, which has proven extremely popular among consumers who favor King Arthur-themed releases.

Wanting to give a completely new perspective to one of the most turbulent relationships, the studio enriched the title with a multiverse of action-packed features. Wild Scatter, extra spins, and Special Expanding symbols are just some of the elements found in this challenging story.

Would you like to take a closer look at Merlin and the Ice Queen Morgana by Play’n GO? Read on!

After her brother's, King Arthur’s coronation, Morgana, the powerful enchantress, runs away from Camelot. Determined to find his former apprentice, Merlin begins his search, but all he encounters is a frozen wasteland claimed by the notorious Ice Queen. Can you imagine his surprise when he discovers that the cold-hearted empress is no other than his apprentice “Morgan the Fairy”?

Being one of the central characters of Arthurian Legends…

…Morgana is often depicted as both healer and villain. Being the most beautiful of nine sisters who ruled Avalon, the Fortunate Isle, she had healing and shape-shifting powers. As her magical powers gradually began to awake, her desire to rule over Camelot grew as well, resulting in her moral decline.

It’s interesting to mention that Play’n GO is not the first studio telling the story of this gorgeous female. One popular provider wrapped it up in Megaways mechanics and created an equally exciting release such as this one.

How Magical Are the Features?

Let’s start with the central characters of the game, whose powers are perfectly reflected in the features they represent. Merlin’s wand is a Wild Scatter and it acts as a replacement for all other icons except for the Special Expanding Symbol. Morgana is a Special Wild and can appear as a stacked symbol and activate the multiplier.

…there’s Expanding Wild Multiplier. Before the mode with extra spins begins, an icon is randomly selected to serve as a Special Expanding Symbol. Expanding is initiated only if enough symbols for a win are present. The good thing is that they don’t need to be adjacent to form a winning combo.

Positive that players will love this dark battle between good and evil, Head of Games Charlotte Miliziano announced as follows:

“There’s another reason we enjoy working on these kinds of series. Like with Merlin, King Arthur, and the gods of Norse mythology, new players already have some knowledge of these characters. They can fully immerse themselves in the narrative regardless of whether they’ve played our existing games.”

Fans of the Merlin series can also check out other masterpieces from the studio’s portfolio. One of them is Rise of Merlin unveiled in June 2019, as well as Lord Merlin & The Lady of The Lake, presented in January this year. Also, there’s The Green Knight, packed with Shield Spins with the x100 multiplier.

“Play’n GO is happy to present one more adventure”

It looks interesting, I can't wait to try it out :)

Amazing game with astonishing graphics! Great job, this is something I'll definitely try..

Spectacular animations! Especially the moment when Merlin's magic wand is drawing the window portal using flame with the notice that you won bonus spins. :)

Play’n GO never disappoints. All of their slots are as exciting as movies, including this one.